After a discussion with one of Thomas J. Garza's students (he teaches 'The vampire in Slavic cultures' at the University of Texas at Astin), I decided to contact the man, himself, for an interview.
I've briefly covered some of his writings found on the 'net and one of them, in particular (see the question on xenophobia), stood out to me. I've also been impressed by his devotion to the Slavic vampire, following in the footsteps of Jan L. Perkowski and Bruce A. McClelland. 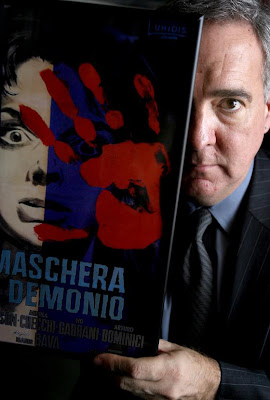 Thomas J. Garza in 'an appropriately bizarre photo from a newspaper article a couple of years ago'*
I sent a request for an interview† and after he agreed‡, sent a long a bunch of questions.§ To his credit, he didn't shy away from the hard stuff, as his responses reveal.‖ Without further ado, heeeeeeeere's Garza!

Anthony Hogg: You have an impressive proficiency with Slavic languages, so how'd you go from that to teaching a course on vampires? Is your vampire course 'bait' for students to delve deeper into Slavic language and culture?

Thomas J. Garza: My interest in vampires certainly goes back to watching -- and loving -- the old Tod Browning's "Dracula" back in the '60s. But it was my work in Slavic languages that took me to the Foreign Service Institute in the late '80s after finishing my doctorate at Harvard. While working with the FSI, I was working in Hungary in the summer of 1988, retraining Hungarian teachers of Russian to teach English (anticipating the political changes there). As my birthday fell on a national holiday, St. Stephen's Day, some colleagues suggested that we drive up to the Romanian border and into Dracula country. Back then, the roads in Sighisoara were terrible, and the final leg of the trip -- up the ravine to the castle remains -- had to be be donkey. But the trip was worth it, and the affect of standing in the ruins was incredible, a kind of transformative experience of being in such a place, as with Stonehenge or Machu Pichu. I distinctly remember thinking then that when I returned to teaching, I would use this "hook" of the vampire story to get students interested in this part of the world. So, in 1997, a year after getting tenured at the university of Texas, I offered the vampire course for the first time. I certainly use the the theme of the vampire as "bait," as you say, to get them into the course that covers the history, geography, religion, literature, and film of the Slavic world, but significantly, it is that same hook that keeps them interested, I think, throughout the semester! I always have a sizable quotient of students who go on to take a Slavic language or culture course after the vampire class, and that's very rewarding.

AH: Speaking of Slavic roots - from a mythic/folkloric perspective - what's your take on the 'universal' vampire? Do you believe vampires are found across the globe, or are they a local, Slavic revenant with unique attributes?

TJG: Vampires, in my experience, are absolutely a global phenomenon, from Asia to Europe, across Africa, and throughout the Americas. The story may vary in details, modes, and/or substance, but there is a "universal" core of the story -- at least in the West: the vampire is creature that has returned from the dead (a revenant), and who takes sustenance from a host, who in the process is weakened or killed by it. Slavic vampires have their own characteristics, which vary from Slavic region to another. In the Balkans, for example, vampires and werewolves began in the lore as rather similar entities, and evolved historically into enemies. In Russian, the werewolf stories were very rare, and the vampire has always taken center stage. S/He is characterized not only as a blood drinker, but also since the nineteenth century as a "contagion," capable of spreading the vampire "disease" to an entire village or community.

AH: You've said, 'As long as we can tap into our xenophobia, then we get into the kind of vampires that make us squeal and jump.' Why is xenophobia essential for this process? Does this process still have a 'place' in our postmodern age?

TJG: It may not be essential, but xenophobia certainly insures that human beings are predisposed to being afraid of anything that's different from us: The Other. In spite of globalization and a seemingly ever-shrinking world, we are nonetheless terribly complacent in our own lives and tend to be very suspicious of non-conforminty -- especially when it's in the form of another culture. Postmodernism has actually given use a better and more effective lexicon to talk about Othering, especially in the context of the post-colonial breakup of empires. So, while a blood drinking creature will, indeed, always be inherently frightening, s/he takes on a special horror when we think don't understand it. That's why the vampires in, say, 30 Days of Night are particularly horrific; they are tribal, pack creatures, who speak a very different language, whereas some the new "integrated" vampires in Twilight, for example, might make some of squeal for very different reasons. I find the vampires and story in "True Blood" particularly interesting in this regard because, although they are also "modern" vampires in a "modern" setting, they have a "back story" -- a history -- that places them in the larger vampire mythos; and in a place like Bon Temps, which is inherently "créolité," difference is more likely to be accepted, and "coming out of the coffin" is possible.

AH: What other elements make vampires scary? Why should we revert to the 'scary' type at all?

TJG: Besides being creature that we don't understand, I think the best vampires in literature and film fall squarely into the age old "thing-that-go-bump-in-the-night" category. Here I mean the element of the unexpected or the uncanny that makes our blood run cold and the hair on the back of our necks stand up. In the original Murnau Nosferatu, it's the anticipation of the arrival of the monster, epitomized by mere shadow of his hand creeping along wall and the accompaniment of live music intensifying our horror; or in Coppola's Bram Stoker's Dracula, it might be the entrance of Dracula into Mina's room as mist, and then moving under her bedclothes while she sleeps, and waiting for her to notice that she is no longer alone; or the vampire Armand in Interview with the Vampire simply running his finger through the flame of a candle -- unaffected. Scary doesn't always (often?) involve blood and guts. I think the vampire in lit and film has historically presented us with a much more complex creature of horror than, say, Freddy, Pinhead, or Chucky, and thus can be much more subtle and effective in the delivery of horror.

TJG: Aurgh! Yes, I would also like the book more accessible and I know the price is high. It is, though, a compilation and as such requires that the publishers acquire the rights and clearances to use all of the texts, the prints, and the lyrics that are included in the book. I had hoped that the price could be kept under $100, but after I added the Russian songs to the volume, it went over. I'm hoping that as more of the texts that I've included in the book become readily available digitally, the price will go down accordingly. Sorry.

AH: A student of yours and I have been discussion on The vampire in Slavic culture's edition statements and we're coming up with some contradictory results. There seems to be more than one. Are there other editions of the book?

TJG: There have been two: the original is through University Readers in 2009, and an updated, slightly expanded version by Cognella (a subsidiary of University) came out in 2010.

AH: Which works/authors have influenced your writings on the undead. Which would you recommend as essential reading?

TJG: Certainly my Slavic-centric focus on the vampire story has been greatly influenced by the works of Prof. Jan Perkowski, who teaches a vampire course at the University of Virginia, and originally taught that course here at the University of Texas back in the 1970s. From the nineteeth century, I'm particularly fond of the works of AK Tolstoy (a relative of Leo Tolstoy), including the stories "The Family of the Wurdalaks," and "The Vampire." Especially the latter embraces the specifics of the Slavic vampire wonderfully, and was made into a very slick, dark film in Russia in 1991 called Blood Drinkers. But my take on the contemporary vampire is very strongly influenced by the Russian/Ukrainian writer Sergei Lukyanenko, who authored the Watch series (Night Watch, Day Watch, Evening Watch, and Last Watch) in the late 1990s and 2000s. All of these are now available in English translations. I think this series is very good, indeed, in not only bringing vampires into the new millennium, but in giving them a role in the greater historical saga of the battle of Good and Evil on Earth.

AH: The vampire in Slavic cultures is, essentially, a university reader. Considering what I've read from you so far, you clearly have some interesting things to say on the subject, yourself. Do you plan on writing your own work on the subject?

TJG: If only there were more hours in the day! I have done a couple of articles that talk about the contemporary Russian vampire in terms of Othering of the Chechens, Caucasians (people of the Caucasus), and Central Asians in Russia, but I would love to do something longer and more substantial in the area of mapping the vampire in Russia. Stay tuned; I promise that there's more to come!

I'd like to thank Prof. Garza for his participation, and forthright, insightful responses. His book, The vampire in Slavic cultures (2010), is available through Cognella and Amazon.

Email ThisBlogThis!Share to TwitterShare to FacebookShare to Pinterest
Labels: Q and A, Thomas J. Garza