I recently got into a discussion with one of my readers about the name of the family afflicted in the Croglin vampire case. There was a source I wanted to consult, to double-check my supposition that the 'Cranswell' name was an invention of Valentine Dyall.
That source arrived today. The source in question? F. Clive-Ross' 'The Croglin vampire', which was published in Tomorrow, vol. 11, no. 2 (1963), pp. 103–9. That article ain't easy to get, so I went ahead and ordered a copy of the journal.*

After discussing early sources for the tale, namely, Hare, Harper and Summers, Clive-Ross said the following about Dyall's contribution: 'A later writer, Valentine Dyall, in his book Unsolved Mysteries**, devotes a chapter to "The Croglin Hall Vampire," and offers much additional information, mostly without any stated authority, and unfortunately of such an unreliable nature as to be almost worthless' (p. 105).

However, Dyall's use of the Cranswell name is actually vindicated. According to Clive-Ross, who visited the area, 'It is interesting to note that the name of the brothers and their sister is still known locally, Cranswell, and it is also said that they were not local people' (p. 108). But Clive-Ross didn't disclose what their first names were, unlike Dyall.

The question is, why didn't Hare, Summers or Harper disclose their names? Were they ensuring the victim's anonymity? If so, why? Is it possible that the local tales were, at least in part, spurred on by the vampire's popularity? When Clive-Ross visited the local post office to find the way to Croglin Low Hall, the woman in charge asks him, "Are you looking for the vampire?" (p. 107). Is it possible Dyall's recount of the story actually tainted local legend? After all, he only says their names were 'known locally', not that there was any such record of their names. Indeed, Clive-Ross mentioned a variation on the legend:

Another tradition connected with the vampire involves Croglin Low Hall, and the two stories were generally repeated together. This story relates that at the time the tenants there had a three-year-old child. From being a happy, healthy child she became frightened, sickly and pale, and the parents noticed what they thought were rats teeth marks on her throat. After Miss Cranswell had been attacked new light was thrown on the child's plight, and the father was one of those who took part in the laying of the vampire (p. 108).

To confirm this thread, we need to go back to the original source, which was Augustus J.C. Hare's The story of my life, vol. 4 (London: George Allen, 1900), pp. 203–8. There is no mention of a child afflicted in this manner, the residents of the house are two brothers and their sister (the victim of the tale) and the vampire is despatched by 'all the tenants of Croglin Grange' by burning the vampire (p. 208).

Clive-Ross' article gives further background on the case, pushing it back further than the 1875 date it's commonly associated with ('Had the story really originated in 1875, as claimed by Mr. Dyall . . .' (p. 109). However, that's one myth I can bust. All you need to do is cast your eyes over to the top left-hand corner of the page: 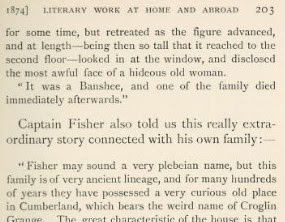 See that date? 1874. Hare's book consists of reproduced journal entries, letters, etc. and Fisher's tale is recounted in the midst of his entry for 24 June 1874 entry (pp. 201–8). That doesn't mean the event took place that year, as Hare's source, Fisher, gives no clear date for which the events transpired. The main clue we have, is that the place was leased to the (unnamed) brothers and sister, after the Fisher family moved to 'the south, to reside at Thorncombe near Guildford' (p. 203).

Clive-Ross' article gives us a thirdhand source, 'Mrs Parkin tells me that she spoke with one of the Fisher family, who was born in the middle-eighteen-sixties, and that he told her he had known the vampire tale all his life, and originally heard it from his grandparents' (p. 108). But what was his version of the tale? Did it uphold Fisher's details? Was his version of the tale coloured by various recounts? Unfortunately, Clive-Ross doesn't say. We don't have that Fisher's name, and considering his birthdate, he'd be long-dead by now. As it stands, Hare's recount of Fisher's tale is the earliest known source of the legend, effectively serving as our default primary source.

That said, Clive-Ross' investigation has given us some fascinating details to work with, and says a lot about field research, including, 'Mrs. Parkin states that in the deeds of Croglin Low Hall the name Croglin Grange was used until about 1720' (p. 108). If you can get a hold of it, I highly recommend Clive-Ross' article to those interested in the Croglin Vampire case.

******************************
So, why 'Good timing!'? Well, a few hours ago, I went to check the mail - after already checking it this morning - to see if the mag had arrived. It was waiting for me in the letter box, so must've been delivered later in the day. Usually, I would take such items inside and carefully rip 'em open, but this time, I decided to open it in the front yard. While I was doing so, a post van drove up the driveway and a postie came out with an Amazon box. Yep, he handed me a box 'o books I'd been waiting on.

The funny thing about that is, I checked the tracking info for 'em, this morning, to see where they were. According to Amazon, they're 'in transit' and the 'latest event' gave an arrival scan for Carlstadt NJ, August 31, 2011 8:31:08 AM. To get my copy of Tomorrow and the Amazon box in that situation, was, to say the least, good timing.

In terms of what was in the box, let's take a look-see.

This particular Amazon spree was triggered after 'discovering' the critical edition of Summers' The vampire: his kith and kin. I don't see the point in ordering one book at a time from there, as separate shipping fees only add to the cost. One reason why I don't use eBay as much as I used to. That's one benefit Amazon has: I can order in bulk. You should see my wish lists.

Anyway, including Summers' book, I wound up ordering fourteen on August 29th. There was a bit of a religious undertone, this time 'round, inspired through reading of Susannah Clements' The vampire defanged (2011). I enjoy such takes, as they touch on my own spiritual background. On the flipside, there's also some skeptical and occultic works in the mix. Here's what arrived today:

Raven Kaldera, The ethical psychic vampire, 2nd edn, Ellhorn Press, Hubbardston, Mass., 2008. Price: $17.81. Dammit, I didn't realise this was a second edition. Gah. Gonna have to chase up the first one, too.

Steve Wohlberg, The trouble with Twilight: why today's vampire craze is hazardous to your health, Destiny Image-3ABN Books, Shippensburg, Pa., 2010. Price: $10.19. Spiritual health, that is.

Joe Nickell, Real-life x-files: investigating the paranormal, The University Press of Kentucky, Lexington, Ky., 2001. Price: $29.95. Bugger-all on vampires, but, going on Nickell's other stuff, should be an interesting insight into scientific paranormal investigation.

Joe Nickell, The mystery chronicles: more real-life x-files, The University Press of Kentucky, Lexington, Ky., 2004. Price: $26.60. Same as above. Though I specifically got the Nickell books because he cites them in Tracking the man-beasts (2011).

Michelle Belanger, The vampire ritual book: the lost rites of the Sanguinarium, The Author, Lexington, Ky., 2003. Price: $19.95. A spell book, essentially. I don't intend on casting any, that's for sure, so mark this one up to novelty value and building on a collection of Belanger's other works. Oh, and isn't Lexington a popular place today! Wow. One main issue I'm finding with these self-published works (Varney, Lady CG, this one), is how hard it is to source their publication details. These books would be a nightmare for cataloguers and people wanting to cite them (like me). Traditionally, publication details go on the title page. Self-publishers take note.

George Beahm, Bedazzled: a book about Stephenie Meyer and the Twilight phenomenon, Underwood Books, Calif., 2009. Price: $9.56. No, I haven't turned into a Twi-Hard, but I am fascinated as to why these books have caught on as much as they have. Beahm tends to ride the pop culture train. His other books of note relate to Stephen King and Harry Potter.

Beth Felker Jones, Touched by a vampire: discovering the hidden messages in the Twilight saga, Multnomah Books, Colorado Springs, Colo., 2009. Price: $11.07. For all the talk on teenage angst, there's an angle which shouldn't be forgotten: the stories are written by a devout Mormon housewife.

Kurt Bruner, The Twilight phenomenon: forbidden fruit or thirst-quenching fantasy?, Destiny Image, Shippensburg, Pa., 2009. Price: $6.00. It's interesting to see how many Christian writers have hopped on board the franchise, themselves, even if to warn against it - or uphold its supposed spiritual values. That's how mainstream Meyers has made vampires. It's almost unprecedented.

Still waiting on two more books, one of them, ironically, is the critical edition of Summers' work, which triggered off this spree in the first place.