A bastard of a book to get

Although I haven't mentioned, one book I've been trying to locate for my collection is Tony Faivre's Les vampires: essai historique, critique et littéraire (1962). Hasn't been easy, but my copy arrived today. 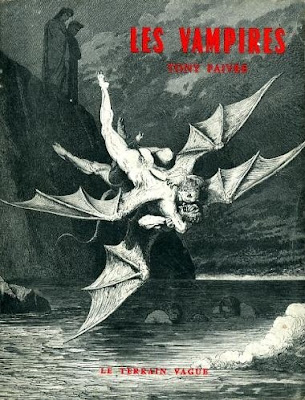 I'll tell ya, it's not an easy book to find. Try and find it on sale. Go on. See how many copies you stumble across. If you're lucky, one might fleetingly pop up on eBay. Even Niels mentions the difficulty in tracing a copy.

I found my copy in an obvious source, Amazon.fr*, but it's not like it's always there. Indeed, I'd already tried that site before. Many times. Fortunately, a private seller had since listed a copy for EUR 44,99 (shipping: EUR 10,99). Snap.

But before the copy arrived, I was stressing out. After all, I'd ordered it on August 3rd. By the 25th, the other books I'd ordered in the same 'hit'** had arrived. That same day, I received an e-mail notification to rate the sale. So...where was my damn book? Had it been lost in transit? Was the seller yanking my chain? A fake? Had they shipped it all? Were my efforts to secure a copy, cursed? All those thoughts raced through my head as I was daily greeted by a packageless letterbox. I was so close, so very close to contacting the seller today. No more delayed delivery blues.

At this point, you might be asking, what's the deal about this book? Why so keen to get it? And to that, I'll say it's a very important book in the field. Firstly, it was published at a time where vampire books were quite rare. The only other major works at the time were Roland Villeneuve's Loup-garou et vampires (1960), Ornella Volta and Valerio Riva's anthology I vampiri tra noi (1960), Emilio de' Rossignoli's Io credo nei vampiri (1961) and Volta's Le vampire (1962).

Volta's 1962 book, as well as Faivre's kicked off serious study of the subject. However, Faivre's contribution is given greater acknowledgement. How important was it? Massimo Introvigne, president of the Transylvanian Society of Dracula's Italian chapter, calls him the 'father of contemporary vampire studies.' High praise, indeed.

Antoine 'Tony' Faivre is still kickin', too. He has made other contributions to vampire scholarship, including an essay for Les vampires: Colloque de Cerisy (1993), but certainly nothing as significant as his 1962 book. He briefly discusses writing it in this interview.

If you're keen on scoring your own copy, I can tell you there's three copies available on PrinceMinister; as long as you know how to navigate yourself around a French website.