I'm still waiting for my copy of the critical edition to Montague Summers' The vampire: his kith and kin to arrive. In the meantime, I noticed Niels has already had a chance to review it.
He's been waiting for critical overviews of Summers' work for some time, so I can only imagine his heart skipped a beat when I forwarded him a link to the book, which was published in May this year with little-to-no fanfare. Hell, not even I knew about it: I stumbled across it on Amazon.

Long-time readers of Niels' blog, Magia Posthuma, will know he's a man with (deservedly) high expectations. If those aren't met, he's not afraid to say it. Therefore, my heart started sinking when I began reading the opening paragraph of his review:

’A Critical Edition’ to me is an edition of a book that sets the work into its context, enabling the reader to better understand the work's genesis and sources, to get a grasp of how the book was received, and to assess its influence and importance then as well as now. At the same time, the word ‘critical’ in my opinion implies a re-evaluation of the work in terms of contemporary knowledge and understanding. In the case of a work of non-fiction this would include correcting errors.

The rest of the review is, well, brutal. But in light of Niels' expectations, and the examples he gives, this approach is understandable. Personally-speaking, I'm happy with the fact that the book's a facsimile and its supplementary material, alone, makes it a bargain at $22.95.

That said, I shouldn't downplay the critical element of the book's title. By emphasising that aspect, it's automatically endowed itself with certain 'responsibilities' and its value as a critical work, hinges on its ability to uphold them. Until my copy arrives, I can only defer to Niels' commentary...which has not gone 'unseen'.

The book's editor, John Edgar Browning, has read Niels' book review. His response is a testament to his professionalism and integrity:

Thank you, Mr. Petersen, for your very thorough elucidation of the contents of this edition. Of course, the "argument" here--that is, the matter at hand--has less to do with the particular contents chosen for inclusion and more to do with how one arrives at the definition of a "critical edition," a subject which continues to spawn fairly lengthy debates among textual criticism scholars. The description you gave, while good, is but one of several approaches to producing a "critical edition," another being concerned primarily with cross-examining and cross-referencing all the major editions of a particular text (though this is generally typical of hand-written texts). The third and most prominent approach is the one we have chosen, similar in design to the quite popular "Norton Critical Editions" series--the major difference here being that we chose contextual documents which provided insight not only into the work itself but the author as well, since in this case the work in question, its writing, and the author himself are so closely intertwined, in our opinion.

The contributors and I made every attempt to give no false impression of what was contained in this critical edition, particularly since the contents were clearly stated on the back cover and in the description given for the book at various websites; if you didn’t have access to this information, then I am very sorry. I, for one, am reluctant to purchase any book whose front and back cover I have not studied thoroughly. In short, we did not promise anything which we did not deliver--nothing more, nothing less.

I appreciate your review. And, what is more, I encourage you to edit such an edition as the one you describe here.

Niels thanked him for his response, and said he intended to write more on the book. Now these are the kinds of 'reactions', I love: intelligence discourse born from criticism. Intellectual bickering, if you will. Heh heh. But, more importantly, it provides an insight into the respective writers' intent.

Criticism–good criticism, that is–is not purely born of malice, but genuine desire for quality in the respective field. If this is not met, then it's 'called out' to keep an author on their toes and to make clear that no substitutions for quality will be accepted. A good writer–aware of their flaws–will take it on the chin and 'fix it', next time 'round. Naturally, every writer and critic has an inherent criteria and intent for their respective writings, so it's important, for the sake of context, to make that clear in the subject they're dealing with or the work they're criticising. 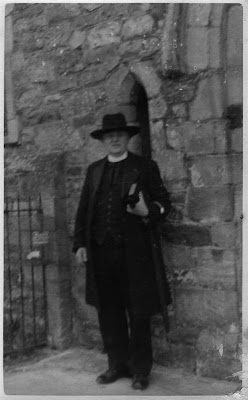 The fact remains that as influential as Summers' works have been, they're not gospel. They're not the Unerring Final Say on Vampires. They deserve criticism. He made mistakes. He was a product of his beliefs and times; or, at least, a deliberate throwback to an earlier time. Summers certainly wasn't above having a go at his contemporaries, either. Here's what he had to say in The vampire: his kith and kin, about Dudley Wright's writings on the subject:

In English there is a little book entitled Vampires and Vampirism by Mr. Dudley Wright, which was first published in 1914; second edition (with additional matter), 1924. It may, of course, be said that this is not intended to be more than a popular and trifling collection and that one must not look for accuracy and research from the author of Roman Catholicism and Freemasonry. However that may be, it were not an easy task to find a more insipid olio than Vampires and Vampirism, of which the ingredients, so far as I am able to judge, are most palpably derived at second, and even at third hand.

But in deeming his own work 'the first serious study in English of the Vampire, and kindred traditions from a general, as well as from a theological and philosophical point of view', he set himself up with certain expectations, too. And by those, he should be held accountable.
Posted by Anthony Hogg at 2:52 PM