I do warn you though, his responses are quite lengthy. So, I've decided to break the interview up into four parts, with two questions/answers per part. Rest assured, they're worth it.

I even considered sending the thing off to Folklore or the Journal of Folklore Research, before realising they'd probably edit the hell out of it. I didn't want to rob you guys of the fullness of the interview, so I decided to stick to the original plan and post it here. Not such a bad thing, considering that Bruce also provided a few weblinks within his responses. The ones he's typed out, I've integrated into the relevant piece o' text. 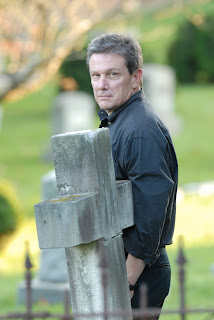 Anthony Hogg: You've published "four books of poetry, a book of translations of the Russian poet Osip Mandelstam", among others, so what exactly drew you to the vampire? When did they first start capturing your attention?

Bruce A. McClelland: The first horror movies I went to as a kid were those great Hammer Studios/Peter Cushing & Christopher Lee updates of the Universal Pictures monster movies of the Thirties (particularly Horror of Dracula (1958), as it was called in the US, and The Curse of Frankenstein (1957). The Technicolor dimension made the bloody scenes more vivid than blood really is (I don't know whether it was the film color or the way they made stage blood, but in my memory, Hammer blood was bright, scarlet red, without the blue component that characterizes real human blood). A few years later, as an early adolescent, I was further attracted to such horror films by the bustiness of the faux Central European milkmaids, vampire wives and girlfriends, etc. Mario Bava and Barbara Steele didn't hurt. So: to answer your question, I was generally interested in monster/horror at the ripe old age of 7, and vampires were just members of the monster club: in fact, I was a charter subscriber to a magazine called "Famous Monsters of Filmland", which I think I subscribed to until it went belly-up.

I should add that as I grew more, um, serious, my passion for horror movies waned. But my interest in Dracula returned in the mid-70s with the publication of McNally and Florescu's In Search of Dracula, which led me to investigate the historical aspects of the Dracula story. Out of that came other investigations, including reading Perkowski's Vampires of the Slavs, which first united my interest in Slavic language and my interest in vampires, and my thinking coalesced into my first book of poetry, The Dracula Poems (1976).

AH: In 2006, you published what has been called the "first book to explore the origins of the vampire slayer", Slayers and Their Vampires: A Cultural History of Killing the Dead. Why do you think this trope of the vampire mythos has been largely neglected in academia?

BAM: Academia, as you call it, until recently was never really aware of any aspect of the vampire outside the literary and cinematic (especially the former). The vampire was received, or as I usually claim, stolen from the Balkans in a kind of Orientalistic frenzy, without any regard for the accompanying religious and folk context. The Slavic vampire was only one type of folkloric being among several in Balkan lower mythology, even up to the 1980s, and nomenclature for only one member of a class of entities across the entire peninsula that had similar and historically related nocturnal and demonic attributes. If you look at the history of English language vampire research, you'll note that most articles and books don't cite even one primary Slavic source, and the usually erroneous statements about the pre-history of the vampire always rely on secondary or tertiary sources. Until Perkowski's work in the mid-Seventies, with few exceptions Anglo-American and continental European research on the vampire confined itself to the research available in Germanic and Romance languages. It was the English novel Dracula, after all, that made the vampire a hit (with a tip o' the hat to Varney, of course), at least in the US and UK. And in Dracula, as in most subsequent films, the image of the slayer is much less important than the character of the protagonist, Count Dracula.

The usual struggle between a hero/superhero and some dragon/demon/devil/evildoer that is the basis of countless popular movies isn't really present in the Dracula story in quite the same way: there are four or five rather bumbling heroes in Stoker's novel (which Polanski satirizes brilliantly), and Dracula's incredible (if putative and only circumstantially discovered) powers are only equaled by the combination of two psychic forces among the human antagonists (viz. Mina and Van Helsing, a point I elaborate in my book). Furthermore, in virtually all cases, the focus is on the method of vanquishing Dracula, but not so much on the character of the destroyer. (Going back to Peter Cushing in The Horror of Dracula, his Van Helsing is more heroic (and flawed) in nature than most other versions, he has more personality or stage presence, so there certainly is a precedent for making the vampire's antagonist a protagonist, but the identity and character of the hero are still less at issue than what kinds of powers are required to meet those of the vampire.)

I'm sorry to be so longwinded about this, but your question has lots of implications. It's really not until Buffy that academics writing about American popular culture actually began to make an industry of discussing an interesting, but hardly incredible television series. I might add that Buffy talks a good game about vampires, but in fact most of the demons in the show are anonymous and draw their physical attributes more from the same pool of visual characteristics and effects as are applied in those films that derive from latter-day neo-Catholic misappropriation of Inquisition demonology (e.g. The Exorcist, The Omen, and the Dan Brown stuff).

Email ThisBlogThis!Share to TwitterShare to FacebookShare to Pinterest
Labels: Bruce A. McClelland, Q and A