I've been discussing the strong possibility that Valentine Dyall 'invented' the Cranswells of Croglin Vampire fame. Seems he did a little pinching from one of his sources, too. 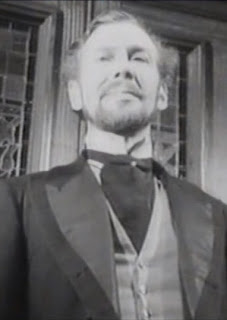 As previously noted, there's no indication Dyall did any field work for 'Vampire of Croglin Hall' (1954). He said, 'The strange tale must be pieced together from the works of independent writers–notably Augustus Hare, in "Story of My Life"; Charles G. Harper in "Haunted Houses," and the Rev. Montague Summers in "The Vampire in Europe." (p. 99). These are the only sources he listed and none of them as as rife with 'detail' as he provided.

Hare's The story of my life, vol. 4 (1900) is the earliest known source of the tale, as told to him by Edward Fisher (1832-1909). Dyall doesn't cite a specific edition of Harper's book, but the first edition, Haunted houses: tales of the supernatural, with some account of hereditary curses and family legends (1907) starts off with a reproduction of Fisher's account from Hare (pp. 67–73) before concluding with Harper's observations:

It is to be added, from personal observation, that there is no place styled Croglin Grange. There are Croglin High Hall and Low Hall. Both are farm-houses, very like one another, and not in any particulars resembling the description given. Croglin Law Hall is probably the house indicated, but it is at least a mile distant from the church, which has been rebuilt. The churchyard contains no tomb which by any stretch of the imagination could be identified with that described by Mr. Hare (pp. 73–4).

Harper's sketch of Croglin Low Hall is sandwiched between pp. 72–3. Summers reproduced the sketch in his 1929 book, The vampire in Europe, which also serves as Dyall's final source. Once again, Fisher's account via Hare is reproduced (pp. 111–15). No Cranswells there. Of the case itself, Summers had this to say:

That a large number of cases of vampirism must be accounted certain only the most prejudiced will deny.

Even in many other relations which cannot be pressed in detail it seems beyond a doubt that the main facts are true whilst the accessories have been embellished for the sake of the narrative. Such a history is that of the vampire of Croglin Grange. Mr Charles G. Harper, who investigated the exact locality, assures me that Mr Augustus Hare was undoubtedly lavish in his colouring. Actually there is no place styled Croglin Grange. There are Croglin High Hall and Low Hall, the latter of which is probably the house indicated. Mr Harper adds: "But it is at least a mile distant from the church, which has been rebuilt. The churchyard contains no tomb which by any stretch of the imagination could be identified with that described by Mr. Hare." (p. xviii)

Despite these reservations, Summers believed the events described by Fisher actually took place: 'These discrepancies do not, of course, militate against the essential truth of the tale' (ibid). Interestingly, Dyall implies his own belief in the tale, but did so by ripping off Summers' comments: 'There are discrepancies in these three versions, but they do not necessarily militate against the essential truth' (my emphasis, 1954, p. 99). Aping Summers' comments about 'discrepancies' in the story took Summers' mention out of context: the discrepancies he was referring to, were the name and location of the house.

Dyall further injured his case by adding 'dates and names are uncertain, and beyond doubt details have been embellished for the sake of shudder and thrill, but to the fair-minded researcher the main facts are clear' (ibid). Not only did Dyall provide dates, anyway (which are inaccurate*), of the four sources–Hare, Harper, Summers and himself–he was the only one to name the tenants.** One must ask exactly which 'main facts' are left after such 'embellishments'!

But who was responsible for them? Which ones was Dyall alluding to? Harper and Summers followed Fisher-via-Hare's account quite closely. Their versions contain no embellishments. If their source, Hare, was indeed, 'lavish in his colouring', we have no earlier source to defer to. At least, none that Harper, Summers or Dyall mentioned. As it stands, Hare's recount of Fisher's tale is the original version. Meanwhile, Dyall's account opens with this:

March winds were howling dismally through the Cumberland hills and the dawn light was a feeble glow behind heavy cloud as Edward Cranswell, master of Croglin Hall***, and his younger brother Michael led their small party of farmers and landworkers into the cemetery.

Silently, that morning in 1876, they filed past the rows of tombstones–vague, shadowy figures in the eerie greyness, muffled in heavy topcoats, carrying flickering lanterns (p. 96).

Compare that with Hare, Harper and Summers' versions. In stealing Summers' 'militate against the essential truth of the tale' bit, Dyall should've paid closer attention to what Summers followed it up with:

but it should be borne in mind that a narrator who thus mingles imagination for effect's sake with fact incurs a serious responsibility. He gives a fine opening to the sceptic and of this every advantage fair and unfair will be taken (p. xviii).

Damn straight. It also turns out that Dyall's 'shudder and thrill' line was also taken from Summers, who continued: 'If a yarn is to be told for the shudder and thrill, well and good; let the ruddle be thick and slab. But write the rubric without ambiguity that this is a high romance to follow' (ibid). Loosely translated: if you're gonna make shit up, say so. But save it for a novel: don't mix it in with details of an existing case, otherwise, how are readers supposed to know which details are right and which ones are wrong? It leaves the door wide open for sceptics (like me) to wade in and slash away at the case's credibility.

Dyall really should've taken Summers' advice. In the meantime, it's possible that after all this, Dyall's 'Cranswells' could be vindicated, thanks to F. Clive-Ross' discussions with locals (*shakes fist at him!*). It's just that Dyall didn't bother mentioning where he got the name from, nor explicitly saying 'Hey guiz! I made it up! Lol!'

I'm lookin' into it.

As a side note, it's interesting that Summers didn't draw obvious parallels between the attack on 'Amelia Cranswell' (as Dyall dubbed her) and Flora Bannerworth in the 1847 penny dreadful, Varney the vampire. After all, both narratives feature an attack on a young lady in a bedroom; the vampire creeping in by picking away at the mortar in a window pane; the vampire entwining its victim's hair in its gnarled hand to expose the victim's neck for a bite...a victim who is also saved by her screams rousing the gentlemen of the house...

Summers was certainly familiar with Varney: he quoted the bloody scene (pp. 105–11) right before launching into the Croglin account. Oh, Monty!

** In fairness to Dyall, F. Clive-Ross' investigation, which was detailed in 'The Croglin vampire', Tomorrow, vol. 11, no. 2, 1963 (pp. 103–9) found that the tenants' surname, Cranswell, was known locally (p. 108). However, there's the distinct possibility that the name was known due to Dyall's version of events. See: 'Good timing!'