The vampire-as-political metaphor is nothing new. But did you know mainstream interest in vampires might say something about which type of government is in power?
Well, American political party, anyway. S Peter Davis wrote this compelling piece on '6 mind-blowing ways zombies and vampires explain America.' The article is based on data collated from Mr. Science Show, in which a comparison table is drawn up between Republican and Democratic presidencies and the popularity of vampire and zombie films during those interims.

The table kicks off with the presidency of Republican, Dwight D. Eisenhower, in 1953. Davis's caption reads, 'And apparently all our apocalypses started with Eisenhower', as the article notes two zombie flicks released that year.

That's an interesting comment, because the following year, a novel was released which would have a significant impact on fictional vampire and zombie portrayals. The novel in question? Richard Matheson's I am legend (1954), which deals with an apocalyptic vampire plague. How significant was it? Put it this way: if it wasn't for that book, the marauding, flesh-eating zombies you know and love, would not exist.

As I've mentioned before, the modern zombie genre stems from George Romero's 1968 film, Night of the living dead, which is funny, because his creatures weren't intended to be zombies in the first place. Indeed, in the movie, they're called 'ghouls', a name derived from Arabic foklore, for a demon that feasts on the flesh of the dead. The reason they weren't called zombies, is because zombies, traditionally-speaking, aren't undead, flesh-eating, infecting corpses. They're undead slave labourers, controlled by a bokor; a sorcerer. Rather than shooting them in the head, feeding them salt will send 'em back to the grave.

That's why (actual) zombie flicks released before 1968 stick to the zombie-as-slave trope. Take Victor Halperin's White zombie (1932), Jacques Tourneur's I walked with a zombie (1943) and John Gilling's The plague of the zombies (1966). Occasionally, modern representations of the sorcerer (read: mad scientist) were used, as in Jerry Warren's Teenage zombies (1959). Even the cannibalistic overtones in Del Tenney's I eat your skin (1964) are a misnomer: no skin is eaten during the movie.

Somewhere along the line, the 'ghouls' of Romero's flick were morphed into 'zombies', extant Voodoo lore to the contrary. Zombies didn't infect others with their 'curse', a major trope associated with modern zombie flicks. That's a vampire trope, i.e. one featured in Romero's 'inspiration', I am legend. I use quotation marks for 'inspiration', because Romero, himself, admits that he did a little more than simply be 'inspired' by Matheson's novel: 'Then I read I Am Legend and adapted - well, actually ripped off! - the first half. And made it into Night Of The Living dead.'

Anyway, back to the political stuff. I was surprised to see the following image appear in Davis's article: 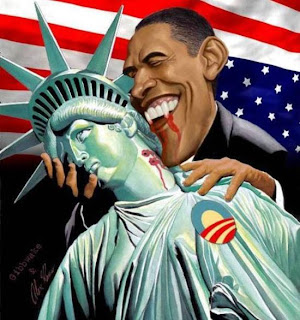 I wasn't surprised with the startling imagery of Obama as a vampire (not the first time I've seen that), but because the picture has been shamelessly 'vampirised' (heh heh) from Alex Ross's famous cover for The Village Voice: 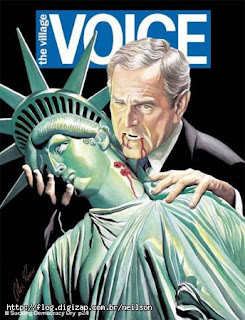 Ross's image was used to illustrate Rick Perlstein's article, 'The end of democracy: losing America's birthright, the George Bush way.' What we have here is a political tool called zoomorphism. Its purpose is highlighted by Joël Kotek: 'To abuse one's adversaries, one dehumanizes them by turning them into animals.'* Funnily enough, this practice has been deployed against me, during my investigations in the Highgate vampire case.

* Kotek includes vampires in this category: 'The two other predominant anti-Semitic zoomorphic motifs are the blood-thirsty vampire and the octopus.'
Posted by Anthony Hogg at 10:43 AM