In search of the Cranswells

Despite Clive-Ross' vindication of the Cranswell family's existence, as covered in the previous entry, I'm still leaning towards the idea that they were 'created' by Valentine Dyall (1908-1985).
Clive-Ross cited Dyall's Unsolved mysteries (1954) as a source, conceding it 'offers much additional information [on the case], mostly without any stated authority, and unfortunately of such an unreliable nature as to be almost worthless.' 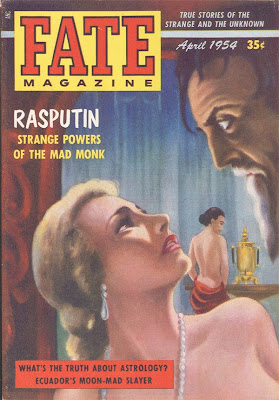 So what makes me think Dyall conjured the Cranswells? For starters, he repeatedly gets the dates wrong. The earliest known source of the Croglin Vampire story is Augustus J.C. Hare's The story of my life, vol. 4 (London: George Allen, 1900). Hare recounted the story, as told by one Captain Fisher** in a journal entry for 24 June 1874. Yet in Dyall's version, the vampire is found one morning in March 1876 (pp. 96, 102). Impossible.

And this is no mere misprint. Dyall said that the 'Cumberland phenomenon can be definitely placed in the years 1875-76', noting that the attack occurred in 'the summer of 1875' (p. 99). In terms of leasing the house to the unfortunate Cranswells, Dyall claimed this occurred in 1873 (ibid). Yet, Fisher's version, as recounted by Hare, makes no such allusion.

Indeed, Dyall's version is rife with nuggets not found in any previous version of the story. For example, the names of the victims, i.e. the Cranswells, composed of brothers Michael and Edward, and their sister (the victim of the vampire's onslaughts) Amelia. But not only them, as we're also introduced to Jem Croswell, 'a young gamekeeper' (p. 97), one of the seekers of the vampire's tomb, who 'had fled' the scene 'half out of his mind!' (p. 98). Again, Fisher makes no mention of this. Neither does Dyall's sources.

And what of Dyall's sources? Thankfully he listed them: 'The strange tale must be pieced together from the works of independent writers–notably Augustus Hare, in "Story of My Life"; Charles G. Harper in "Haunted Houses," and the Rev. Montague Summers in "The Vampire in Europe." (p. 99). Unlike Clive-Ross, at no point did Dyall indicate he'd done any field research. This makes Clive-Ross' 'vindication', in that their names were 'known locally' as the Cranswells, all the more suspicious.

It gets better as Dyall slowly unravels the jumping point from his sources: 'There are discrepancies in these three versions, but they do not not necessarily militate against the essential truth: dates and names are uncertain, and beyond doubt details have been embellished for the sake of shudder and thrill, but to the fair-minded researcher the main facts are clear (my emphasis, p. 99).

It's hard to say–with absolute certainty–whether Dyall was being naive or taking the piss, especially as he was obviously one of the perpetrators of the embellishments. After all, if, indeed, 'names and dates' are uncertain, why did Dyall go out of his way to provide specific (incorrect) dates and where on earth did he gets those names from?

Without an honest-to-goodness lease document confirming that the family were the Cranswells (and, if you read Clive-Ross' article, you'll find that certain details in the story push the events back to the 17th century***), I think it's highly plausible that locals were relying on Dyall's version of the story (or recounts of it), and synthesised it with local legend. And, to me, that's how the Cranswells were 'known locally': names for the unnamed.

It seems few were familiar with Hare's version via Fisher. Even Dyall, who cites it, went completely off track with the dates–and the method of the vampire's demise. According to Fisher, the vampire was simply 'burnt' after its discovery. But in Dyall's version, the villagers 'drove a stake through its heart', too (p. 98). But not before a bullet is pried out from the vampire's leg, which Edward Cranswell recognises as 'one he had bought in Switzerland' (p. 104). Meanwhile, in the Fisher version, the participants of the hunt simply see 'the marks of a recent pistol-shot in the leg'. No one tries to pry it out.

* The article, in turn, was 'Reprinted from Everybody's Magazine' (p. 96). Unfortunately, the reprint provides no further publication details (issue, year).

*** However, as noted by Scott Rogo in 'Second thoughts on the vampire of Croglin Grange', Fate (June 1968), pp. 46–7, the vampire's attack on the sister bears an uncanny resemblance to the opening scene of Varney the vampyre (1847).
Posted by Anthony Hogg at 1:02 AM