Discussion of dates and an interesting find

Props to funkyjane, for tipping me off on lower prices for Thomas J. Garza's The vampire in Slavic cultures. After discussing her comment, I'll also reveal an interesting find I unearthed on Amazon.

Ms. Jane informed me of a 2010 edition of his book, which is for sale via the publisher's website. At the moment, the going rate for this book, on Amazon, is $162.95, which means it's actually increased in price since it was published in 2009. As it that wasn't exorbitant enough, check out the book's used prices.

The book available from the publisher's webiste, however, is not a new edition, but I can see why Ms. Jane thought it was.

And here's where it gets murky.

The copyright date that appears in books is not necessarily the year the book was published. For example, the third edition of J. Gordon Melton's The vampire book: the encyclopedia of the undead is listed as being published on 1 September 2010 and it was certainly available for purchase last year. However, if you check its copyright date, it'll say '2011'.

Same principle applies to Brad Steiger's Real vampires, night stalkers, and other creatures from the darkside. Its publication date is listed as 1 September 2009, yet it features a 2010 copyright date. I wound up contacting the book's publisher about this 'discrepancy' and was told 'in publishing, the copyright year generally starts in September, which is when Real Vampire [sic] was published'. Note 'generally'. That also probably variates from country to country.

That, of course, leaves us with a frustrating riddle: which year is the 'right' one? The copyright year of the year of publication? That depends on the style guide you consult.

In terms of citation, this research guide, which breaks down the Modern Language Association style, mentions 'For a book, use the copyright year as the date of publication, e.g.: 2005, not ©2005 or Copyright 2005, i.e. do not draw the symbol © for copyright, or add the word Copyright in front of the year.' Other style guides may have a different take, or none at all. Always make sure you use the most current version.

It also depends on the context you're using the year. For example, a book could (I would think) have its publication date mentioned in-text, while a citation for it using the copyright date, would (hypothetically) be ok.

What matters is consistency, which, unfortunately, I haven't totally engaged in on here, as I occasionally alternate between a book's copyright date and publication date, when discussing it. Plus, the matter is further hindered by how much insight the researcher has into the book's publication date.

After all, if we're relying on the book, itself, how do we know what its exact publication date was, if the only info we have on hand is the copyright date? Should we start checking the publication dates of all the books we consult? Tricky stuff. I might delve into this issue at a later time. 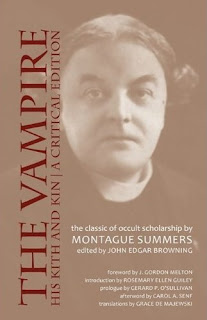 In other news, how the hell did I miss this? While trawling through Amazon to write this entry, I stumbled across a critical edition of Montague Summers' The vampire: his kith and kin. 'Included in this critical edition are the authoritative text, rare contextual and source materials, correspondence, illustrations, as well as Greek and Latin translations. A biographical note and chronology are also included.'

Oh, hell yes! Into my shopping cart you go!

Check out the list of people involved in its creation: edited by John Edgar Browning (Draculas, vampires, and other undead forms: essays on gender, race, and culture, 2009), an introduction by Rosemary Ellen Guiley (Vampires among us, 1991; The complete vampire companion, 1994; The encyclopedia of vampires, werewolves, and other monsters, 2004/2011; Vampires, 2008), an afterword by Carol A. Senf (The vampire in nineteenth century English literature, 1988) and a foreword by J. Gordon Melton (The vampire book: the encyclopedia of the undead, 1994/1999/2011). What a line-up!

Fingers crossed they take on Summers' companion tome, The vampire in Europe (1929) next.

Also, I hope they haven't relied on the online version of The vampire: his kith and kin. There have been many reprints of that book, which stem from Bruno J. Hare's Internet Sacred Text Archive (ISTA) version.

The problem is, some of the text has been deliberately altered. You can tell which publishers have copy-n-pasted their reprints from ISTA (or other sites, which, in turn, have relied on the ISTA version), by seeing if they've included the following entry in Summers' bibliography: 'ERAH, J. Onurb. Key to Vampyrology, Witchcrafte & Dæmonologie for Guidance of ye Slayers. The Watchers' Society, Cambridge, 1751.'

The entry is not featured in the original Kegan Paul, Trench, Trubner & Co., Ltd. edition (1928), because Key to vampyrology doesn't exist. The entry was fabricated by transcriber, Bruno J. Hare (Erah, J. Onurb), to undermine copyists.
Posted by Anthony Hogg at 5:07 AM

What a conundrum! I was under the impression of there being two editions - but not because of the copyright/publisher dates. In class I asked Professor Garza if - seeing as he had been teaching this course for 13 years - if there was an older edition that would be acceptable to buy used. He said there was the "2009" edition and that it would be fine to use for the course as long as I photocopied the two essays included in the newer edition not found in the older. So when I saw the '2009' and '2010' dates around the net, i just assumed they were the two editions.

Perhaps if your book is anthology or textbook you can make changes to it without calling it a new edition? Perhaps the publisher failed to update the sample pdf? Prof Garza told us to buy the text from the publisher, so they clearly have the most recent. Whether or not it's considered a new edition or not - beats me! I confess to having very little knowledge about book publishing.

On a side note, Prof Garza did mention the high price of his text is an unfortunate side-effect of having a great deal of copyrighted material included in the book. Apparently from 97-08 he had the material in a course packet, and price rose so high ($200+) that it actually became cheaper to have it as a book.

The only reference I've seen to another 'edition' of his work, is 'Introduction to Slavic Civilization "The Vampire in Slavic Cultures' (2007), as listed on Amazon.

Perhaps his reference concerns a reader circulated in the uni, itself. Or, he's got his dates mixed up. Or maybe he's referring to a reprint.

I think I might have to chase this one up for you, Ms. Socks!

I can sympathise with Mr. Garza's plight. However, it also means he's cutting out a lot of his audience (that said, I'm still gonna get his book!).

What I'd really like to see from him, though, is his own book on the subject. If he's been teaching the course for 13 years, then surely he'd have something to write about the subject, himself. He'd be following in the footsteps of Jan L. Perkowski, whose 1976 book, Vampires of the Slavs was actually a university reader, too, before he cut loose with many of his own writings, most notably, The darkling (1989).

I just had an idea, Ms. Socks.

Would you be interested in submitting a guest blog on what it's like to be a student of Prof. Garza's class?

Sure! I like to write, I like vampire stories, what could be better? ... although, I may get unreliable around mid-september, and it will be because of huge exam-oriented stress (GRE = . Just a warning. But the class is only tues & thurs and I could easily write a quick something-or-other about it. only question I have is...

how does a guest blog work?

No worries about the exam stuff (all the best with 'em, by the way). No rush. I'd love to hear (well, read) your impressions and experience of studying under Prof. Garza. It'll give an idea of what one undertakes in such courses.

No word counts, no limits. You write whatever you want to. :)

As to how it works, easy. You e-mail me your post and I post it to my blog. You'll find my e-mail addy in my Blogger profile.

Alright! I've started writing but it might take me the weekend to finish (between it and other things), I'll send it your way when I'm done. My problem is i write waay too much information (usually irrelevant tangents) and it takes me ages to edit. but long or short it is forthcoming.

And I asked Prof Garza about the "edition mystery" -- one is a revised edition. The table of contents is the same, except for 5 new songs added to the appendix. he fixed some typos and errors in his translation, and basically took back his earlier statement about "photocopying two essays" and told me either edition is perfectly fine for the course. so that's that! i think, anyhow.

Cheers for clarifying the edition mystery, also. Much appreciated. I'm surprised that no such commentary is mentioned in the website, however. Ah wells. I presume the changes were relatively minor; not enough to earn it a 'new edition' tag.