Stephen King's Salem's Lot (1975) is one of my favourite vampire novels and one of his most successful. Many years ago, he spoke of writing a sequel, even outlining a basic plot. It's been thirty fives years, so what's the go with it? 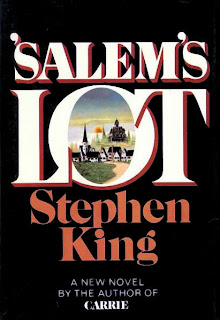 If you haven't read the novel, then maybe you've seen its adaptations. It's been made into a miniseries, twice, in 1979 and 2004. In fact, the first miniseries even inspired a direct-to-video sequel. Of sorts. Of sorts. It's hard to accept it as "canon" when it tinkered with the continuity of King's novel and the 1979 series it alluded to. Nonetheless, it's an entertaining film in its own right.

Back to the novel. As early as 1982, King was trumpeting his desire to write a follow-up. Douglas E. Winter featured King's say on it in The Art of Darkness: The Life and Fiction of the Master of the Master of the Macabre: Stephen King (London: New English Library, 1989)¹. I've inserted spacing in the paragraphs for legibility's sake:

Should I give you a preview? Ben Mears and [Mark Petrie] are now living in England, where Ben is doing the screenplay to one of his books . . . [Mark's] in school. While Ben is in his studio, [Mark] comes home, makes dinner and begins to get calls via transatlantic cable - from his mother.

Father Callahan will come back, too. He's working in a Detroit soup kitchen, and this dying bum comes in: 'Father, you've got to bless me.' 'I'm not a priest anymore,' he says. The bum is gugling out his last words, 'It's not over in Salem's Lot yet.' And believe me, it isn't! (52)²

The 2004 miniseries features a soup kitchen scene with Father Callahan, but it's certainly not a sequel. The closest contemporary thing we have to an official sequel is "One for the Road", which first appeared in Maine (March/April 1977), and later included in his short story collection, Night Shift (1978). It's a sequel by virtue of the fact that part of it occurs in 'Salem's Lot after the events in the 1975 novel. Not much in the way of an actual plot, though.

However, there's certainly an arc in place. A prequel was also published in Night Shift, and the town's "subsequently mentioned in passing in The Shining, The Dead Zone, The Body, Pet Sematary, Dolores Claiborne, Dreamcatcher, and the last three books of the The Dark Tower series (Wolves of the Calla, Song of Susannah, and The Dark Tower)."

The last grouping's the most relevant to our question: will there ever be a novel-length sequel? There's certainly still demand for it. For the answer, though, we turn to Stephen King's FAQ page:

Actually, I'm hoping to write a sequel to almost all of my novels and you will find those in Wolves of the Calla, Song of Susannah, and The Dark Tower--really in the whole Dark Tower sequence. You'll find out a lot of what happened in 'Salem's Lot for one thing and one character in particular - I'm not going to tell you which one. This is in no way an advertisement for The Dark Tower books, but it is my way of saying that The Dark Tower books finishes up a lot of business from the other books.

Spoiler alert: "one character in particular" is Father Callahan. The Dark Tower books are far-removed from the "real world" setting of the novel, its prequel and mini-sequel, though. Still canon, sure (it's King's story, after all), but it's just not the same.

On the plus side, he's at least expressing interest in writing a sequel, even if it's the daunting task of writing one "for almost all" of his novels. He's a prolific guy. So, will a "proper" sequel ever emerge? I guess we can paraphrase the same answer quoted by Winter: when he finds the time.

¹ My paperback copy. The original was published in 1984 by New American Library.