In the previous entry, I said, 'As it stands, Hare's recount of Fisher's tale is the original version' of the Croglin vampire tale. That's a reference to the version printed in the fourth volume of Augustus Hare's autobiography, The story of my life (1900). But, as it turns out, the story was doing the rounds before then... 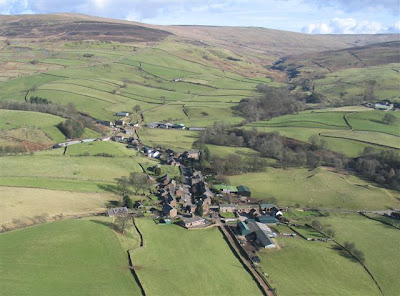 As mentioned, Hare's biography is composed of material taken from his journals, letters, et. al. The Croglin vampire story, as told to him by Edward Fisher-Rowe, features in a journal entry dated 24 June 1874. If we take Hare on his word (his autobiography isn't composed of facsimiles), then the earliest-known version of the story still stands at 1874.

However, thanks to Google Books, I can tell you that the story was doing the rounds before Hare included it in The story of my life. So who was spreading it? None-other than Hare, himself. And I'll tell ya, he loved creeping people out with it. Here's how Clifford Harrison described Hare, his penchant for ghost stories, and the vampire tale:

Everybody who knows Augustus Hare–and everybody does know Augustus Hare!–knows how wonderfully he tells a ghost-story. He has a fine collection of ghosts. They are all labelled and certified with names, dates and references–the most authenticated and documented ghosts I know. A ghost-story gains greatly by dramatic telling. Written down, it loses some of its 'creepiness.' Augusutus Hare tells a story of a vampire which, in his hands, owes a good deal to the 'points of circumstance' with which he tells it. I have heard the tale also from a descendent of the possessors of Crogley [sic] Grange, in which house the grisly incident occurred, and the tale is undoubtedly full of curious and somewhat unanswerable questions (1892, p. 190–1).

A very frustrating reference, as it doesn't relate the particulars of the story, nor does it say who the 'descendant of the possessors of Crogley Grange [Croglin Grange]' was. But it does show that Hare wasn't the only one who knew about it. Nonetheless, it's great seeing a reference to the story published before 1900.

But the fun doesn't stop there. I've actually turned up an earlier reference to the story. Here's Andrew Lang, discussing contemporary vampire literature:

That work [J. Sheridan LeFanu's 'Carmilla'] will give you the peculiar sentiment of vampirism, will produce a gelid perspiration, and reduce the patient to a condition in which he will be afraid to look round the room. If, while in this mood, some one tells him Mr. Augustus Hare’s story of Crooglin [sic] Grange, his education in the practice and theory of vampires will be complete, and he will be a very proper and well qualified inmate of Earlswood Asylum (1885, p. 20).

The article was probably written in 1884, as the volume I consulted (Nov 1884-Oct 1885), doesn't do the best job indicating which articles are from which issues. It's also unfortunate that Lang's reference to the story is vaguer than Harrison's. He doesn't even say how he heard it. But it's possible another reference might be found somewhere amidst his prolific output.

It's pretty obvious Hare was a popular bloke and keen on the story, as I've found another reference to him telling it. While this reference was published in 1957, the author recalls it from his childhood: he was born in 1881. The author in question? E. F. L. Wood, 1st Earl of Halifax:

And I remember, but I think he usually came in either summer or autumn, Augustus Hare making all our flesh creep with his story of the vampire at Croglin Grange, which he could only tell when he wore a very much ribbed shirt, so that picking his shirt with his nail, he could represent the vampire picking the mortar from the window pane to get in (The Earl of Halifax 1957, p. 34).

In the meantime, I've been delving into the Fishers. The only clue we have to when the story took place, is when the Fisher family moved to 'the south, to reside at Thorncombe near Guildford'. It was then leased to an unnamed family of two brothers and a sister, who Valentine Dyall named Michael, Edward and Amelia Cranswell. Edward Fisher (1832-1909) was born at Thorncombe, as was his father, Thomas Fisher (1790-1870). For now, that's where the trail ends.

However, F. Clive-Ross' local consultant, a Mrs. Parkin, told him that the story 'dates definitely from between 1680 and 1690', and also noted 'that in the deeds of Croglin Low Hall the name Croglin Grange was used until about 1720' (1963 p. 108). People familiar with Croglin Low Hall–a Grade II heritage listed building–and its layout will note it's a two storey house, while the house of Fisher's tale is a one storey. Clive-Ross has an answer for that: 'the house was raised by one storey, circa 1720' (p. 109), around the same time the window the vampire was supposed to have crept through, was blocked. Hmm...

In the meantime, here's an article on Edward. Specifically, his death. Quite a tragic figure.

Great work on Croglin - you've gone further down this particular rabbit hole than anyone I think.