I've been wondering whether the critical edition of Summers' The vampire: his kith and kin used web material as its source or referred to the original text. So, I went straight to the source: the book's editor, John Edgar Browning.

That sounded ominous, until I read his comments on my Facebook status update about the book (August 29 at 9:20am). One of my Facebook friends, Kyle, complained about the book being expensive (September 1 at 1:44pm), to which John added:

What a relief! Also, dayum! Couldn't agree more. All that for US$22.95. Bargain. My copy of the book's yet to arrive, but John did send me a brief pdf preview of the book's contents on Friday. While only a few pages long, I was very impressed with what I saw. For starters, it contained an image of Summers which I'd never seen before: 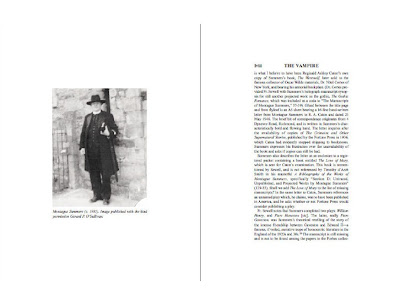 It also features contemporary reviews of the book, as well as Summers' correspondence...with Dennis Wheatley, no less. We're also treated to a chronology of events in the mysterious Summers' life. As John noted (September 1 at 7:49am), I'm not the only person who's blogged about the book.

I had a feeling I knew who he was referring to, and it was confirmed when I saw his link to the FoBSM blog. I noticed they'd pilfered some content from my blog entry (the parts showing which contributor wrote what). On the plus side, it's good to see the Friends of Bishop Seán Manchester take time out from their usual practice—cyber-bullying Manchester's critics—in order to plug the book.

It's also refreshing to see something not written by Manchester or Peter Underwood (Life Member of Manchester's Vampire Research Society) appear on their blog. Such is the esteem with which Summers is held by the Bishop and his friends. Of course, considering that Manchester views himself as something akin to a reincarnation of the late cleric, it's not all that surprising.

Anyway, I also took the opportunity to ask John whether there'd be a critical edition of Summers' follow-up vampire book, The vampire in Europe (1929). On Friday, he told me the book had 'been contracted and is expected out late this year/early next year'. Hell yeah.

Can't wait to get my copy. If you're interested in scoring your own, it's available through Amazon.
Posted by Anthony Hogg at 11:54 AM

I just wanted to say that I enjoy your blog. I stumbled upon it while googling "Ojai Vampire". I cited your blog entries for my blog's entry on the Ojai Vampire.

Perhaps I may suggest a new blog entry for you?.....the fluidity between vampires, witches, and werewolves. That's a subject that I do enjoy discussing, how we seem to think that the three are distinct but in reality they flow one into another. In superstition witches become vampires upon death and curse other people into werewolves, as well as become werewolves themselves. Then we have the witches who feast on the blood of humans, often while transforming into bird-like monsters. Not to mention that vampires can also transform into wolves. Just thought I would suggest that. I like vamps but I'm more of a witch guy myself. Witches have always fascinated me.

I'm certainly familiar with the connection between vampires, witches and werewolves, but I also think it's an example of homogenizing diverse 'strains' in folklore to create a central vampire image, as it were.

That said, such a blend could very well have lead to the creation of vampires, especially if we view the development of the striges, or strix and parallel them with the stryges of Mercure Galant.

I may very well do a write up on the subject, as per your suggestion, so stay tuned!