I stumbled across an interview in one of my recent purchases, which was conducted with the Federal Vampire and Zombie Agency Director, Hugo Pecos. 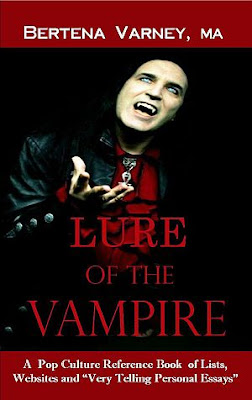 Bertena Varney's Lure of the vampire: a pop culture reference book of lists, websites, and "very telling" personal essays (2011) is very telling indeed, as it contains an 'Interview with Hugo Pecos creator of The Federal Vampire and Zombie Agency' (pp. 116–18).

Varney provides an intro to the interview, stating, 'The Federal Vampire and Zombie Agency is an alternative history site founded by Richard Dargon.' His connection to Pecos is made clear: 'Richard created the role of Hugo Pecos as a creative outlet for all the questions that he had in regards to what if vampires and zombies were real' (p. 116).

Varney describes his (actual) occupation as 'a paid writer with interests in dramatic writing, screenplays and, stage plays. He also has a background in biochemistry hence the love for science fiction' (p. 116). Which also perfectly explains his pseudo-scientific explanations for the undead, and why so many are duped by their 'plausibility'.

That's all from Varney's intro, but here's a word from the man himself: 'The best part of having an 85-year-old alter ego is that I don't have to make apologies for my poor web design skills!' (p. 117). I can't be mad at Dargon for the ruse. After all, he's ensured the FVZA site has enough 'tells' (including disclaimers) that the material featured there, is fictional.

What disappoints me, however, is the way his material is seeping into non-fictional narratives through writers who've made little-to-no-attempt to look beyond the site's warped version of history, fictional personages and books, and been dazzled by its 'scientific' explanations for vampirism. And most disturbingly, it's starting to appear in non-fiction vampire books by authors like Theresa Cheung and Charlotte Montague. And it's all so obviously fake. That's what I find most infuriating. Pecos/Dargon, somewhat diplomatically, says:

There has been an interesting set of reactions to the site. I've heard from would-be vampires and would-be hunters. I've heard some crackpot theories. One person even complained about his tax dollars going to waste funding such an agency (p. 117).

If you want to read more about the machinations behind the creation of Dr. Hugo Pecos and the FVZA, grab a copy of Varney's book.
Posted by Anthony Hogg at 1:55 PM