I've noticed that I score a few hits to my blog, based on searches for this guy. Some readers might recognise him from the FVZA website, which should be setting off alarm bells.
According to the FVZA, Fatinelli was a Florentine scholar, who studied under Galileo Gallilei, and was tried by the Inquisition for refusing to retract the findings in his 1616 work, Treatise on vampires, in which he claimed that 'microscopic entities, not moral failures, that were the real source of vampirism.' That same year, he was burned at the stake on April 23rd in Florence's Piazza Signoria. Here's their picture of the unfortunate gentleman:

Or is it? Thanks to the assistance of TinEye, a 'reverse image search engine', I can tell that no, that ain't Ludovico. That's 'Italian Dominican friar, philosopher, mathematician and astronomer', Giordano Bruno.* Here's his picture: 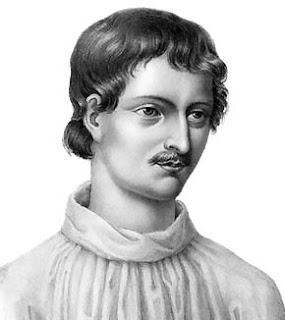 Bruno would've had great difficulty publishing his findings in 1616—and being burned, for that matter—considering he was dead at the time (d. 17 February 1600). Bruno was was burned at the stake for heretical views, however, it had nothing to do with examinations of vampire physiology.

Ok, so maybe the FVZA made a mistake. Maybe they got their pictures mixed up. Sure, that's obviously Bruno, but what about the other pictures they used? Like the painting of his trial, for instance?

Pretty hard to make out any faces in that pic, considering how small it is. But that's probably because if you did see a larger image, you'd find that it actually depicts the trial of Fatinelli's 'mentor', Galileo Galilei. 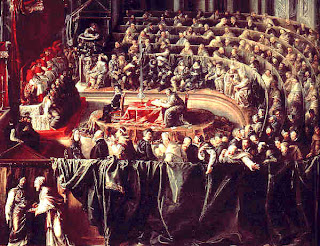 Maybe Fatinelli was in the docks, giving moral support? Nope. The trial took place in 1633, seventeen years after Fatinelli's 'death'. Unlike Bruno, Galilei was spared the stake. He died on 8 January 1642 of heart complications.

There's one more picture from Fatinelli's FVZA page. It depicts his execution, and true to Fatinelli's fate, the person is being burned at a stake. Hell, it's even taking place at Florence's Piazza Signoria! I'd recognise it anywhere! Surely, that's gotta be him! 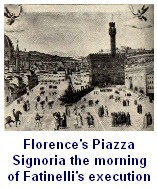 'Fraid not. Sure that's Florence's Piazza della Signoria, but the dude barbecuing on the stake isn't Fatinelli. It's Girolamo Savonarola, 'an Italian Dominican friar, Scholastic'. 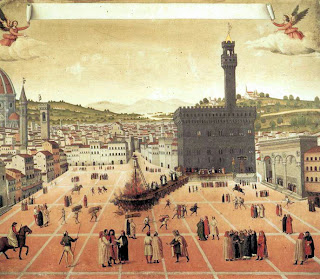 He wasn't even Fatinelli's contemporary: Savonarola was executed on 23 May 1498. In case you still believe Fatinelli's backstory, despite the FVZA's recourse to falsely captioning pictures of him, here's a note on the cultural significance of Fatinelli's name from Ezechiele Toti: 'indeed, ludovico fatinelli doesn't exist , the italian form is lodovico and not ludovico that's spanish, fatinelli is a surname from Lucca, but not Florence'.

Need more proof? How about this from the site's homepage: 'Please note: This site is for entertainment purposes only. Some material is not suitable for children or young teenagers. See the Disclaimer below for more information.' What does the disclaimer say? This:

This site is fictional and is for entertainment purposes only. We are not affiliated with the U.S. Government in any way. Under no circumstances are you to harm anyone based on information from this site.

private company categorized under Motion Picture Producers and Studios. Our records show it was established in 2001 and incorporated in New Mexico. Current estimates show this company has an annual revenue of $99,000 and employs a staff of approximately 1.

What a coincidence! Founded in the same year the FVZA site went online! Dango's owner and president is Laurie Volkin, a freelance editor and writer, 'specializing in medical writing and communications.' Medical writing, like, say, the 'scientific' explanations for vampire physiology in the FVZA pages? The same person with a Bachelor's Degree in Communications/Liberal Arts? I'll let you do the math.

So, there's no need to try and find a copy of Fatinelli's treatise, as neither he, nor the book exists. If you're interested in tracking pre-20th century vampire works, I suggest using Melinda K. Haye's 'Vampiri Europeana: a chronological listing' as a springboard.

* To give credit where it's due, one of my readers, Ezechiele Toti, had previously noted that Fatinelli's portrait was actually Bruno's.
Posted by Anthony Hogg at 1:08 PM

I think I mention in one of my vampire kit posts that the FVZA's kit is a photoshopped version of the Surnateum's.

One fictional organisation borrowing from another!

I could devote several blog entries to show where the FVZA has taken their images from. lol

I did see that fake vampire kit, too. Clearly, it's based on other fake kits being auctioned off for exorbitant amounts.

But I wrote this particular entry as a bit of a PSA. It really disheartens me to see how many people take the FVZA seriously. Their stuff's even starting to slip into non-fiction vampire books like Cheung's and Montagu's.

All it took me to uncover this stuff was a basic grasp of history, as well as a few Google searches. Not hard.

What really disappointed me was seeing Ludovico's name pop up in several vampire timelines, that mingle actual vampire stuff (for want of a better term) with this (deliberately) fictional stuff. The FVZA could very well be the wellspring of modern day legends and conspiracy theories by people who haven't bothered to check the source.

With due credit to the FVZA, their homepage makes it very clear that their stuff is fictional.