In early 2008, Barack Obama was the subject of a short called Barackula: The Musical.

Barackula is a short political horror rock musical about young Barack Obama having to stave off a secret society of vampires at Harvard when he was inducted into presidency at the Harvard Law Review in 1990. Obama (Justin Sherman) finds that he must convince the vampire society that opposing political philosophies can coexist or else the society may transform Obama to the dark side. Reminiscent to Michael Jackson's Thriller and a slight infusion of Jesus Christ Superstar and The Rocky Horror Picture Show.

Now that he's actually President, it seems he has gone over to the darkside.

Well, at least going by this mask doing the rounds for Hallowe'en: 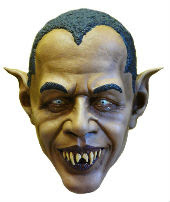 Looks like it's more than foreign policy sucking the country dry.
Posted by Anthony Hogg at 5:16 PM