Stumbled across an interesting essay covering an aspect of vampire research you rarely see in English language works on the subject. 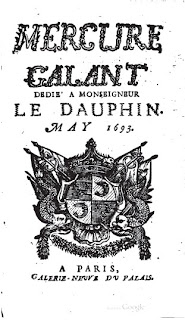 That is, eighteenth century dissertations on the undead. Before Summers, those guys kicked off vampire research as a serious field of study. Their contributions to the genre can not be underestimated.

Koen Vermeir's essay (opens as a pdf), 'Vampires as creatures of the imagination: theories of body, soul and imagination in early modern vampire tracts (1659-1755)' is essential reading. It also touches on the whole 'who was the first true vampire' thing I've been discussing here. I e-mailed him*, asking if it would appear in print form.

Vermeir let me know** that his final version of the paper will feature in Diseases of the imagination and imaginary disease in the early modern period (Brepols Publishers, forthcoming), edited by Y. Haskell.

Thanks for digging this out (ha). Turns out I had a copy on my HD but must not have read it. All too easy to forget what you've saved for later.

Haha no worries. I actually came across it in the midst of our lil discussions, funnily enough.

I've got a lotta stuff littering my HD, too. Sometimes, it's served me well. I was lucky I had a spare copy of that source for the 'nosferatu' blog article lying about!