Bigfoot and the undead

I've noticed some interesting parallels between Bigfoot research and vampire categorisation (a subject I've been discussing here and here). Time to wade back into that semantic quagmire. 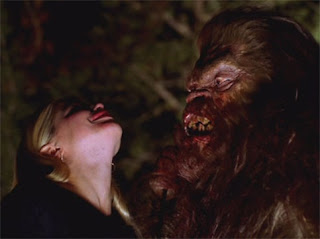 It began with reading bshistorian's coverage on the way Bigfoot is represented, who, in turn reproduces a post by a JREF forum member, noting, 'It’s an interesting reminder of how history can be more easily co-opted to suit certain agendas by taking advantage of ignorance – ignorance of the past and of cultures and traditions alien to our own.'

I believe this principle applies to vampire categorisation, too. The 'vampire' is used as a term of convenience when discussing various mythical, legendary and folkloric beings. To get to the 'source', we have to revert back to the vampire's 'origin' point, that is, the earliest uses of the term in conjunction with the classic bloodsucking corpse type. After all, the word entered our language to refer to this specific being.

I acknowledge the evolution of the word's usage since it was first published in the Western European press. It has lead to apt variations like 'vampirism' and makes sense when we apply it in an occultic context to refer to 'psychic vampires'. Sometimes, people use the word to describe themselves.

The word's metaphoric context was first mined in Caleb D'Anvers' journal, The Craftsman, which featured an article discussing 'Political Vampyres' (20 May 1732, pp. 120-9), which explicitly drew parallels with the Arnod Paole case and its associated characteristics.* However, the word's original usage has not been phased out.

And that's the inherent 'problem' I see with the broad application of the word. In terms of vampire categorisation, its usage is so expansive, you really have to start asking where to draw the line. Here is a definition for vampires in Jonathan Maberry's Vampire universe: the dark world of supernatural beings that haunt us, hunt us, and hunger for us (New York: Citadel Press, 2006):

Quite simply, vampires are supernatural beings that take what is not theirs to takes [sic]—blood, life, breath, or some other vital part of their human victims; and they take it by force. It is the taking without permission that characterizes the vampire. Even in cases of vampire seduction, the vampire is using supernatural powers to seduce its victim, which is no more a consensual act than spiking a woman's cocktail with a "date rape" drug (p. x).

Apart from raising questions on the nature of 'consent', many beings in myth, folklore and legend embody these characteristics from ghosts to witches to demons. However, even Maberry admits that his use of the term is 'for convenience' (ibid.).

Compare this with what Joe Nickell says about Bigfoot research in Tracking the man-beats: sasquatch, vampires, zombies, and more (Amherst, N.Y.: Prometheus Books, 2011): 'There seems now to be a trend towards standardization, as the creature evolves into a mythical being—central to a belief shaped by planetary concerns' (p. 75). That was after noting 'What becomes apparent from all this data [of various 'Bigfoot' sightings] is the incredible variety of creatures reported (including many that are white, gray-blue, yellow, brown, reddish, black, etc.; that are horned and fanged, or not; that walk on all fours or upright; that have two to six toes and the like)' (ibid.).

How can such supernatural diversity be reconciled under a single heading? In the quest for convenience, doesn't the cultural emphasis of such beings, their local names, become lost in the process, in order to synthesise these beings under a single 'type'? In terms of 'reconciling' various traits, isn't a 'new' being created?

Occasionally, such 'reconciliation' is employed by paranormalists shoehorning various data to suit their own theories and 'experiences', not limited to presenting an 'alternate' history to 'validate' comparatively modern 'phenomena'. Montague Summers did it. So does the Vampire Research Society.**

To come full circle, 'Bigfoot' scores a mention in Shane MacDougall's (Jonathan Maberry) The vampire slayers' field guide to the undead (Doylestown, Pa.: Strider Nolan Publishing), p. 142, while Janet and Colin Bord, in discussing the hysteria and subsequent cash-ins on sightings near Sister Lakes, Michigan, mention a monster hunting kit for sale: 'For $7.95 the keen hunter could buy a light, a net, a baseball bat and, to clinch matters, a mallet and a stake' (my emphasis, cited in Nickel 2011, p. 73).

* The Arnod Paole case was so significant to vampire research, it introduced 'Vampyre' (vampire) into our language via the coverage given in The London J0urnal (13 March 1732) which The Craftsman article quotes from.

** see my dissection of their so-called 'Vampirological testimony' parts one, two, three, four.
Posted by Anthony Hogg at 3:33 PM