In "More Wishes", I openly wondered whether the April 20, 2010 release of Paul Barber's Vampires, Burial, and Death: Folklore and Reality was actually a new edition.

So, I decided to ask the author himself.

Barber confirmed that the book isn't a second edition, but contains an updated introduction partly discussing the current Twilight craze. The index has also been re-jigged.

The book's publisher, Yale University Press, also apparently refers to the book as a "reissue".

If you've missed out on getting an original copy of Barber's 1988 work, then the reissue will do you a world of good. Plus, it's got this spiffy new cover! 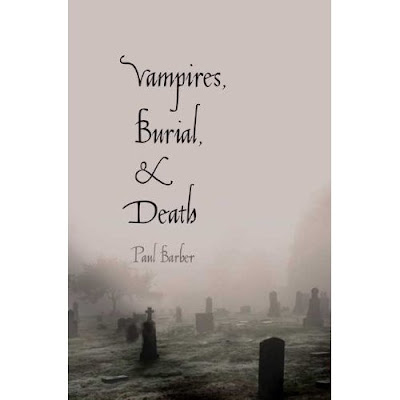 Next up, we look at Brad Steiger's Real Vampires, Night Stalkers, and Other Creatures from the Darkside (2010). We'll be focusing on disputed page length, which was previously covered here.

As I mentioned, its Amazon listing credits it with 400 pages. As of this writing, it still does:

However, as I previously noted, I have a copy of this book and the pages only number up to 287.

So, I contacted the book's publisher, Visible Ink Press (VIP), about this discrepancy.

A representative confirmed that the book didn't have 400 pages, but 304 pages. Now, this makes sense, because the 287 figure I referred to was its page length in Arabic numerals. What I failed to take into account were the Roman numerals used for the intro, etc.

Nonetheless, this still takes it far below the 400 pages listed on its Amazon entry. The VIP's rep informed me he had contacted Amazon about the matter. But, as can be seen from the screencap, the page number's yet to be fixed.

Something else that bugged me about Steiger's book was the copyright date in its publication details. The book was quite clearly published in 2009. Amazon confirms this. Yet, the publication date is listed as 2010.

What's the deal there?

The VIP rep was able to give me the scoop on that, too: "in publishing, the copyright year generally starts in September, which is when Real Vampire [sic] was published."

That would also explain why Jay Stevenson's The Complete Idiot's Guide to Vampires was published - and available - in late 2001, but has a copyright date of 2002.

Mystery solved!
Posted by Anthony Hogg at 1:47 AM