A brush with FATE

Yesterday, I received photocopies of a bunch of articles I'd ordered from popular paranormal mag, Fate. Let's take a look at my swag. 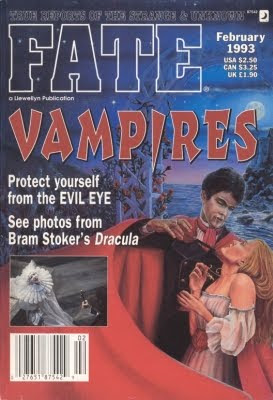 That didn't quite sound right. Anyway, I'm interested in various perspectives on vampirism. But one that particularly fascinates me (apart from folklore), is the paranormalist viewpoint.

I was able to track down several of the articles thanks to citations in Martin V. Riccardo's Vampires unearthed: the complete multi-media vampire and Dracula bibliography (1983). I can't emphasise the importance of such bibliographies to research. Without further ado, here's what I scored:

There's a couple which eluded me, namely, Ivor J. Brown's 'The unquiet grave of the vampire' (January 1967) and Guiley, Rosemary Ellen Guiley's 'Vampires from outer space' (2005 FATE UFO Special). The customer service rep suggested I might've cited them incorrectly**, so I'll be on the watch for those. Also, if any readers think I've missed any of Fate's vampire articles, drop me a line.

If you're interested in any of the articles, yourself, I'll warn you that they're US$5 a pop (plus postage). They gave me an exception on postage, though, on account of how many of the buggers I ordered. Very nice of 'em. Speaking of nice, their customer service was exemplary. Props goes to Christine for responding promptly and always in a cheerful and helpful manner. Brilliant. So, if you're interested in ordering any, pop over to their online store. You can buy entire issues. I was just after specific articles.

Now, some brief notes on the articles. I'm wondering if V.B. Shay's 'James Brown, vampire' (November 1949) was an inspiration for Robert Damon Schneck's The president's vampire: strange-but-true tales of the United States of America (2005). Can any readers confirm that? Haven't yet obtained a copy of the book, meself. Just curious. If I'm not mistaken, that book primarily deals with the James Brown case (no, not that one).

I've got a feeling that Valentine Dyall's 'Vampire of Croglin Hall' (April 1954) was the originator of the names of the family (Michael, Edward and Amelia Cranswell) afflicted by the Croglin vampire. After all, the family is unnamed in Augustus Hare's original recount (Story of my life, vol. 4, 1900), nor are their names mentioned in Dyall's other sources, Charles G. Harper (Haunted houses***) and Montague Summers (The vampire in Europe). The rest of Dyall's rendering seems kinda embellished, too.

The 'Scientist says no to vampire theory' (January 1986) news snippet is the earliest rebuttal I've seen of the deeply-flawed, yet popular porphyria theory. It quotes Dr. Karl Alexander, certainly a reliable source considering he served (and still serves) on the scientific advisory board of the American Porphyria Foundation.

'Psychic vampires' (May 1996) was written by the author of a popular little tome called Vampires: the occult truth (1996). It's good to see his his full name - Konstantinos Karagiannis - attached to the article, as his usual pen-name (Konstantinos) makes me think of him as the vampire world's answer to Cher.

Thomas D'Agostino's 'Rhode Island: the vampire capital of America' (October 2001) looks like it might've been a precursor to his 2010 book, A history of vampires in New England. I've got a copy, but haven't read it yet. Will it be as good as Michael E. Bell's Food for the dead: on the trail of New England's vampires (2001)? Let's say it's a mighty high benchmark.

Lastly, the two articles by (disclosure: a mate of mine) Daniel J. Wood - 'Vampires and disease: the bloodsucking corpse of English tradition' (December 2007) and 'The White Death of New England' (January 2008) - might be teasers for his book, Realm of the vampire: history and the undead (2011). It's great to see his book score wider distribution, as it was previously only available through Fate's online store. Make sure you score yourself a copy.

* Originally published in Pursuit, vol. 16, no. 3. This was the journal of the Society for the Investigation of the Unexplained (SITU).

I'd be interested to know re the Cranswell claim possibly being in Dyall's article. I have a note to self to the effect that the name was given to Clive-Ross by local people during his 1962 visit, but I didn't leave myself a reference and consequently can't trust myself!

I've yet to read a copy of F. Clive-Ross' article. But I can tell you that the article appeared in Tomorrow (Spring 1963), a paranormal mag which Clive-Ross also edited.

Tomorrow was a predecessor of Studies in Comparative Religion.

While Googling some stuff to write this reply, I actually found a copy of the mag on Amazon! Put it on order. Might do a write-up on the Cranswell mystery after I get it.

However, let's say I have my suspicions. Firstly, the earliest known (written) account of the Croglin Vampire, was in Hare's Story of my life, vol. 4 (1900), which you'll be able to find on the Internet Archive.

The source of the tale, one Capt. Edward Fisher, does not give his 'characters' names. Neither does Summers, neither does Harper. Both were relying on Hare's re-telling.

Indeed, Rogo took a punt at tracking the name, himself, and came to a dead-end.

If the name was used locally (I'll find out once the mag arrives), it's also possible that it was influenced by Dyall's article.

Dyall does not mention from where the names were obtained (and even fudges the story, by saying the vampire was staked, as well as burned). But most telling, Dyall notes:

'There are discrepancies in these three versions [Hare, Harper, Summers], but they do not necessarily militate against the essential truth: dates and names are uncertain, and beyond doubt details have been embellished for the sake of shudder and thrill, but to the fair-minded researcher the main facts are clear' (p. 99).

Methinks Dyall doth protest too much!