Just When I Thought It Couldn't Get Any Worse...

The Fright Night remake is scheduled for an August 14 release date in the US. There's no escaping it. It's happening. Let's say my apprehensions about this film have only been heightened by one of its posters.
Arguably the most endearing character of the original 1985 movie, was Peter Vincent (Roddy McDowall) a washed-up horror actor, best known for playing vampire hunters. His character was a tribute to the horror flicks of the 1960s and '70s; his name an amalgamation of Peter Cushing (1913-1994) and Vincent Price (1911-1993).

He represents horror cinema's old guard, reduced to hosting a late night horror show. Even that remnant from the past's tenuous, after he's fired from his own show: "Apparently your generation doesn't want to see vampire killers anymore, nor vampires either. All they want to see slashers running around in ski masks, hacking up young virgins." Later, the role he played in movies so often, is transferred to real life. 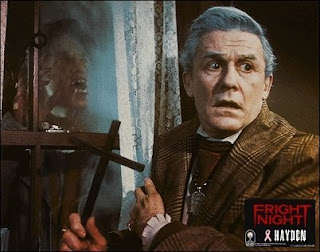 As revealed in a previous entry, David Tennant will be playing Peter Vincent in the remake. However, in this "reimagining", the horror host angle's been ditched and so has the connection old school horror flicks. It's been replaced with this: 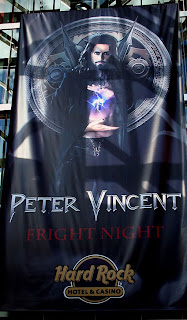 Yeah, that's right: a Criss Angel-like Las Vegas magician. That's not just a visual summation, it's the actual character description. Ugh. Dunno why they've made him look like Jared Leto, though. Anyhoo, just to scrub that image from your mind, here's an awesome poster for the 1985 original: 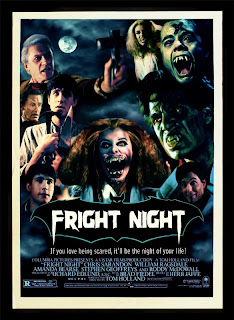 FYI - There is more to the "new" Peter Vincent character than has been shown. The surprise twist in teh tale will satisfy even the true original FN fans. I should know I love the original.

Thanks for your comment! Could you elaborate what this surprise twist happens to be?