Bats Where They Don't Belong

I've discussed the importance of paper trails, now here's a lesson on why we should consult original sources wherever possible.
Everyone knows vampires change into bats. It's common knowledge, just like their fear of sunlight and extra-long canine teeth. Problem is, there's no historical basis for their ability to change into flying mammals prior to the publication of Dracula (1897). As Elizabeth Miller notes, 'Stoker's major contribution to the link between vampires and bats was to have a vampire shape-shift into a bat' (2006, p. 16).

I've never been able to establish a pre-Stoker connection, meself. That is, until I read a reproduced newspaper article in Christopher Rondina's Vampire legends of Rhode Island (1997).

The article's called 'The vampire theory' and originally appeared in the Providence Journal (21 March 1892). Rondina prints it in its entirety (pp. 31–7). Here's the relevant portion:

In all forms of the tradition, the vampire left its abode, and wrought its object, at night. When the full moon shone and the sky was cloudless, its opportunity was supposed to be most favorable. It left the body of the dead at the back of the neck, and appeared as a frog, toad, spider, bat or venomous fly from that moment until it returned to its corpse home (p. 34).

Appeared as a bat! This was an exciting find. I knew Stoker had heard of New England 'vampire' cases. After all, his working notes for the novel contained an article discussing them. Was it possible that he read other newspaper articles on New England vampirism? Had he somehow come across the Providence Journal article? Had it inspired the vampire lore in his book?

Before I explored this theory any further, I had to double-check Rondina's source. I had to find a copy of the original article. After all, I was potentially dealing with a major discovery: pre-Stoker evidence of the vampire's ability to transform into a bat. Thanks to Rondina, I had a periodical title, an article name and a date. All I needed to do was track down a faculty that actually kept copies of the paper.

After some Googlin' and a coupla e-mails, I managed to track down a place: the Providence Public Library. Their librarian kindly sent me a copy of the article, which arrived on the 24th. The relevant citation was written on the photocopy, so I even had a page number, which Rondina neglected to cite. 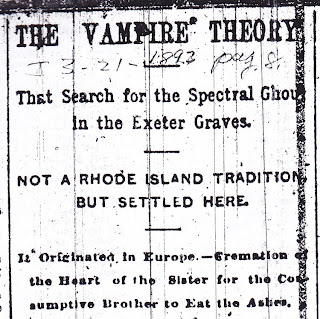 There was only one portion of the article I was really interested in, so I hurriedly scanned through the page to see if Rondina's quotation was accurate. I found the relevant section Rondina quoted, along with a notable omission:

'It left the body of the dead at the back of the neck, and appeared as a frog, toad, spider, venomous fly, from that moment until it returned to its corpse home.' Despite the murkiness of the photocopy, it was readily apparent that the vampire's ability to appear in the form of a bat is not mentioned in the article. Here's a closer view:

I don't see 'appeared as a frog, toad, spider, bat or venomous fly' (my emphasis). Can you? There's no significant gaps between the text indicating missing words that might've been left out when the paper was first printed. There's no smudginess, indicating obscured words. Simply put, 'bat' isn't there. Let's say I was incredibly disappointed.

Despite this setback, I still retain a sense of optimism. I mean maybe, just maybe there's a pre-Stoker source out there that tells us vampires could change into bats. But Rondina's source isn't it. In the meantime, it's a shame we have to wade through erroneously transcribed (at best) or deliberately falsified (at worst) material to chronicle vampire lore.

Nonetheless, I'm willing to give Rondina the benefit of the doubt: if he can produce a copy of the article that actually includes the bat 'omission', as well as cite the faculty he obtained the article from, I am more than willing to retract my critique and offer a sincere apology. Ball's in his court.

Miller, E 2006, ‘Getting to know the un-dead: Bram Stoker, vampires, and Dracula’, in P Day (ed.), Vampires: myths and metaphors of enduring evil, At the interface/Probing the boundaries no. 28, Rodopi, Amsterdam, pp. 3–19.