Well, second, if you count the chap I've dealt with here. A commentator on my blog has taken great umbrage with something I said about a certain author's work. Can I defend myself against the 'slings and arrows'? 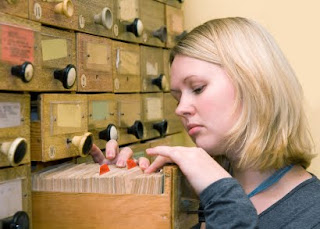 In dealing with a piece of falsified info in Christopher Rondina's book, Vampire legends of Rhode Island (1997), I said 'If we can dish it, we gotta take it, too, but it's always important to start off with a strong case.' So, in this spirit, I present commentator Melody's response to something I said about Theresa Bane's Actual factual: Dracula (2007):

Obviously any book containing over 600 different species of vampires is not a 'mere' catalogue of vampire species. I'm sure detailed reseach and investigation went into this book, and with 600 examples of vamipires, time and effort that went into this project must have been immense. If you have read this book and another that you say is supposedly even more detailed, and dont agree with either of them, perhaps being a vampirologist isn't for you, just an observation.

Ouch! Apparently my 'mere catalogue' statement about one of Bane's books completely undermines my chosen 'profession'. Everything else I've written is null and void, as a result! Yeah, ok...

Yes, I did call Bane's book a 'mere catalogue' (Bane wasn't too happy with that description, either). Perhaps I should've been more clearer on why I thought that, but then again, it was my opinion, too. An off-hand remark. I wasn't writing a review. But, thanks to your criticism, Melody, I'll make my case now.

Firstly, I'll say Bane's a fantastic vampirologist. She's a real credit to the field. No sarcasm here, I'm serious. Hell, we even have similar tastes, namely the mythological/folkloric aspect of vampires. Nowhere did I say a lotta work hadn't gone into the book. I wasn't undermining the effort she put into it, I was critiquing its format. It is a catalogue. That is, a listing of various species of vampire, along with brief descriptions of their attributes, etc.

My main issue with it, however, is that in providing so many diverse entries, we're left with a helluva paper trail to unravel (to her credit, she at least includes a bibliography [pp. 345-50]). Putting so many beasties into a single stew, I believe, also fragments the essence of what a vampire is. Admittedly, this is a notoriously difficult aspect of vampire study. Exactly what is a vampire? Funnily enough, Bane's asked that question, herself.

But for the sake of her book, Bane provides the following definition, 'Vampires are creatures who must consume "life essence" on a semiregular basis to sustain their own existence' (p. xiii). The problem is, when you apply such a broad definition, you could be talking about practically any evil monster, spirit or demon from mythology and folklore.

You find this approach in various vampire 'field guides'. Did you know that the Jersey Devil makes an appearance in Shane MacDougall's The vampire slayers' field guide to the undead (2003), even though the author admits, 'Though not a vampire per se, the Jersey Devil has been associated with the mass slaughter of animals and stealing of children, ostensibly to feast on both' (p. 43). Like I said, where do you draw the line?

As a work of comparative mythology, Bane's indices (2007, pp. 355-445) are invaluable. But what if you want to individually trace the source of each entry? You're stuck. Why? Because sources don't appear with each entry. You'd have to sift through the books in the bibliography. Fives pages worth. I admit, this is a somewhat growing bias of mine, due to the frustrations I encounter when dealing with dead ends. But that situation is remedied in Bane's follow-up book, Encyclopedia of vampire mythology (2010). It is brilliant. Her approach to vampirology is much more clearly defined (pp. 1-5). And off the top of my head, every single entry is sourced. I love it. I'd even go so far as to say it's one of the best vampire books ever written. Did I mention its totally sweet cover? 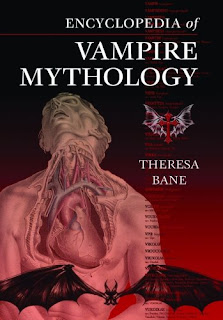 If the indices of Actual had been incorporated into her Encyclopedia, you'd have a book on vampire 'species' almost impossible to topple. So, used in tandem, they're great. But Actual, as a standalone, is practically another vampire 'field guide'. A 'mere catalogue'.

Funny that you mentioned Bane so recently, Melody, as I've been planning on doing a write-up on her 'Vampire research book list'. So, stay tuned for that!

Hahaha, well, she was starving, so I had to give her a nibble!

Seriously, though, I didn't mind responding. It's a good intellectual exercise and forces me to put my money where my mouth is. So, I didn't mind doing it in this case.

And who knows, maybe she's learnt a lesson about context. Everybody wins!

um, sweetheart, i was talking about you being a troll, not melody.

Also, she never undermined your 'profession' just suggested you reconsider it. Perhaps spending so much time down-playing others' work instead of having a real job has clouded your judgement?