Inking your body with Twilight motifs is a pretty hardcore sign of devotion to the franchise. Obviously. Here's one example that comes with an inspirational story behind its origins. 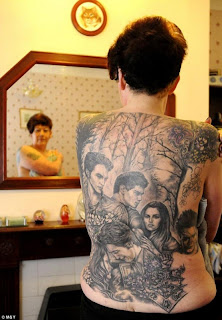 This is Cathy Ward, 49, of Reading, England. A friend gave her a DVD of the first film during an ebb in her life. She became obsessed with the series, and spent her downtime following the series rather than snacking. She managed to drop 14 dress sizes. She got the tatts done (with more to follow) in commemoration of the series' role in saving her from morbid obesity.

So, despite what some might say, turns out Twilight's good for something.
Posted by Anthony Hogg at 3:58 PM