The year's drawing to a close. What better opportunity for a retrospective! Time to review what went down on this in 2010. Cue excess linkage! 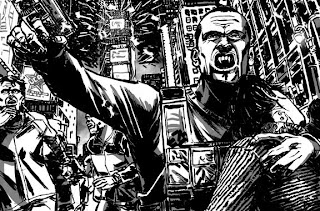 I began the year complaining about a slow delivery from the Canadian postal service. As it happens, I'm currently awaiting the arrival of a package from there. It was sent in mid-October, so I guess we've come full circle there.

I've given some decent coverage to the Twilight phenomena this year, but no post specifically on the subject drew as much attention as this. In fact, it was my 10th post popular post overall.

I began Q & A this year. My first interviewee was Niels K. Petersen. He was followed by Martin V. Riccardo and Bruce A. McClelland.

A Brian Solomon post served as a wake-up call and inspired my own rant on blogging ethics.

My third most popular post dealt with fake vampire books, namely Henry Gray's Anatomy of the Vampire or Vesalius' Five Books on the Structure of the Vampire Body. They're inventions of the FVZA. Yet, just like the Necronomicon, some people think they're real. I caught reference to one in Vlad III's Wikipedia entry, and allusions to 'em occur in a non-fictional work: Theresa Cheung's The Element Encyclopedia of Vampires (2009). Who knows where else they'll turn up.

The most popular post, however, concerned the mistaken authorship of a famous vampire story, "Wake Not the Dead". You probably thought it was written by Johann Ludwig Tieck. No surprises there, as that's who it's usually attributed to.

My coverage of the Ojai Vampire scored a few hits. I first read about that case in Rosemary Ellen Guiley's The Complete Vampire Companion (1994). I did a li'l more digging by contacting the Ventura County Parks Department. Here's what they said.

In the midst of that, I gave tips on how to be a vampirologist in my contribution to Michele Hauf's VampChix.

Justin Blair, one of the directors of Across the Forest (2009), kindly sent me a copy of his documentary for review. I was suitably impressed. It wasn't perfect, but a pretty damn good job overall.

I shined a light on a few relatively obscure vampire cases, namely the Gorbals Vampire, Sarah Ellen Roberts and the Birmingham Vampire. Incidentally, the latter post was this blog's 6th most popular.

After reading Andrew's review of Mystery and Imagination: Dracula (1968), I spotted a familiar rendering amidst the screencaps. Speaking of Dracula, I also reviewed a biography written by Stoker's great-nephew.

As the remake (oh, sorry, "reboot") train rolled on this year, I glanced through the casting choices for the upcoming reboot of one of my favourite vampire movies.

Then, after some prompting by one of Theresa Bane's posts, I imagined a world without Dracula.

Stay tuned for part 2 of this blog entry. In the meantime, I wish everyone a safe and happy new year! Thanks for joining me and I look forward to your company in 2011.

I'll leave you with a couple of treats. Firstly, I came across coverage of an interesting beauty pageant from 1970. Second, while it's a bit late to even think of attempting it, here's Jack Baker's "Steal the Show at the Vampire New Year Party". Just goes to show there's vampire-related everything.
Posted by Anthony Hogg at 1:51 AM

Email ThisBlogThis!Share to TwitterShare to FacebookShare to Pinterest
Labels: Celebrations

Just as a matter of interest, Cheung's encyclopedia has hit the publisher clearance houses over here - picked it up today...

I don't wanna say too much about the book so you'll have a totally unbiased opinion, but what I will say is...take note of the references to Dr. Hugo Pecos of the FVZA. I'm surprised at how often they cropped up.