As I previously mentioned, Justin Blair, one of the directors of Across the Forest (2009), sent me a copy of his documentary for review. I finally settled in to watch it yesterday, armed with my trusty Presstick exercise book, for note-taking purposes. 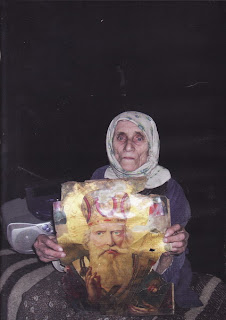 Across the Forest's DVD cover (Courtesy of Andrew M. Boylan)
The first thing that struck me about the film, was no title menu. It just leaped straight into the flick. So, don't expect any special features with this one, folks.

We begin with a middle-aged man recounting the story of a mysterious wolf (said to be "a strigoi"), which turns out to bookend the film. The strigoi are frequently said to be Romanian vampires; one blogger even goes so far as to say "the word for vampire in Romanian is strigoi". No, it's not.

The word for vampire in Romanian is (wait for it), vampir. Meanwhile, strigoi translates as "ghost" or "specter". However, as becomes readily apparent, it shares many characteristics with the revenant.

These characteristics are notable in the next account, an old man who claims he was "haunted" (he actually uses that term) for nearly three years, by a strigoi that lived in a mulberry tree, "crying like a mother who lost a child". The interesting thing is, the dispassionate reference to "a strigoi", when, it turns out the strigoi was actually a relative. We only find this out when the old man is prompted off-camera ("The strigoi was your father-in-law?").

His narrative seems disjointed: when asked if he was scared of it, he said no, and would go to look for it in his attic. What spurred him into doing this if it lived in a mulberry tree?

The spectral qualities of the strigoi are evident again, when he says he would turn on the light, and it'd disappear, only to start howling.

He went to priests for help, "but they failed in their work". This motif is found in the ninth chapter of David Keyworth's Troublesome Corpses: Vampires & Revenants, from Antiquity to the Present (Southend-on-Sea, Essex: Desert Island Books, 2007). 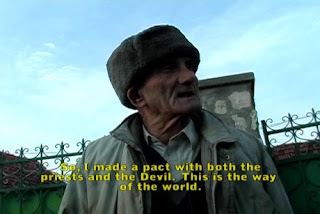 "Playing both sides?" asks the interviewer. "What else can you do? Nothing," the old man says.

And here we play on the revenant angle again, when he mentions that the strigoi was dressed in its burial clothes.

When asked if others believe "this", he said, "Others say they don't believe, but even the priests know these things happen." He was asked if his neighbors believe in such things. He says, "Without experiences people don't believe." He goes onto emphasise just what kind of beings these strigoi are: "But spirits do return, and Satan can come back disguised as the dead."

The next account, by an old woman, discusses the events that converted her from being a skeptic to becoming involved in dispatching an alleged strigoi with the help of its nephew.

The ensuing stories (not all of them about strigoi) range from personal accounts to friend-of-a-friend stories. But what remains consistent is the seeming conviction these elderly peasant folk have in the tales they tell, and it's hard not to be swept away by it all. 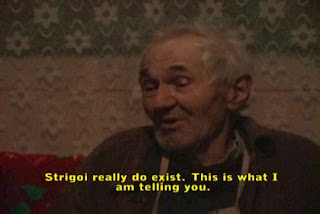 Some of them express frustration with the relative lack of belief in such things by the present generation. One elderly man blames television for this change:

"They don't need advice. They don't listen to anybody."

"They don't listen to anybody?"

"They are stupid as a box of rocks. That's how I see it."

"Because they have television?"

"Of course. Can you learn everything by yourself? When you are together with other people, they change your thoughts. You hear new things. You gather stories from strangers. Different people and different places. But if you never listen to people then you die stupid."

In light of the continuing debate over TV potentially causing brain rot, it's an interesting assessment.

As to the stories themselves, in essence, what makes them different from people who receive visits from their dead Aunty Mabel or claim they were taken aboard alien spacecraft for a jolly good probing?

The candor of the subjects can be quite surprising at times. I laughed when one of the elderly women described an incubus attack on her grandmother, in the following manner: 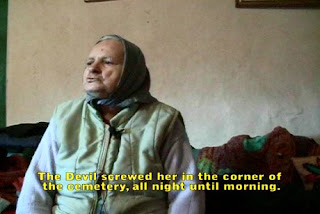 Speaking of which, some of the folkloric parallels were also quite startling to me. The story of St. Toader's Horses was like a gender-switch of the Scottish glaistig; there was the use of a horse to track down the undead, a precedent found in other vampire folklore, as well as the motivation behind scattering seeds (or, in this case, dirt) as a form of spell to keep the strigoi entombed.

The old lady who helped dispatch the strigoi (as mentioned earlier), also noted that the corpse's mouth "twisted and sneered" after it was impaled. The corpse's "living" reaction is also found in other vampire accounts.

You'll notice that I've primarily focused on the stories, rather than the film itself. That's because the very drive and focus of the film, is the stories being told. It isn't awash with flashy techniques and isn't even narrated. Essentially, it's a living folkloric record, occasionally interspersed with evocative (though amateurish) drawings of events being described.

Some portions are quite superfluous, like the slideshow of random countryside images accompanied by a crescendo of music after the pact-with-the-Devil bloke's account. I found the use of these photographs somewhat questionable, as they don't seem to have an immediate relevancy to the film. The depiction on the cover, itself, doesn't connect to the "plot". There's also a shot of someone's dinner during the end credits. Why? I don't think they needed to resort to such filler.

I also had an issue with fade outs, as a lot of them took longer than they should. There's also a section of the film showing the filmmakers driving, fixing a car and drinking, all in night-vision, which was pretty pointless.

The segment on "Dracula's place" after the end credits was totally irrelevant and undermined the film before it. Should've been edited out.

You'll also note that I haven't referred to any of the subjects by name, and instead used "elderly man", etc. That's because their names don't appear during the film. You have to wait till the credits roll, when there's an "In Order of Appearance" list, which is somewhat frustrating. I think the ages of the participants and their locations could also have been disclosed. This is being mindful of regional variants in folkloric accounts, from which a comparison could be drawn. Instead, we're left with the occasional mentions the participants make themselves.

Overall, this is a very straightforward documentary, practically unembellished (although I was a little uncomfortable with the [admittedly] few prompts by the interviewers). The music is superb and quite atmospheric. Despite my criticisms, I would even go so far as to say this doco is an invaluable contribution to Romanian folklore studies.

Even if you're not into the field, it makes compelling viewing in its own right. I actually sat in silence through large portions of it, so absorbed was I in the tales they told. Fascinating viewing.
Posted by Anthony Hogg at 12:29 PM

I too, enjoyed the film. While I don't completely sympathize with the review (I loved the bit with the filmmakers driving down the road), the criticisms do make sense.

All and all, this is a straightforward documentary that will appeal to anyone interested in sincere storytelling.

The bit about them driving along the road, I found superfluous to the narrative. But, over all, it's a pretty damn good doco. I certainly recommend it to others.