Andrew's screencap (Fig. 1) of a prop in his review of Mystery and Imagination: Dracula (1968) drew my attention: 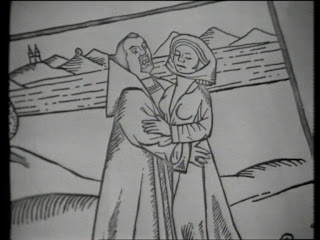 Fig. 1 Andrew's screencap.
It's a woodcut rendering of Denholm Elliott's Dracula character, which caught my eye for two reasons. Firstly, I've seen that image before. Well, not the version used in the film (more on that, shortly). Second, it tied in with Andrew's comments about the movie's emphasis on sexuality: "If Stoker hinted at a sexual aspect to vampirism then this production screamed it".

So, what's the link between the two?

The image this phony woodcut is based on, originally depicted an incubus. Don't know what an incubus is? Here's a definition: ". . . a demon in male form supposed to lie upon sleepers, especially women, in order to have sexual intercourse with them, according to a number of mythological and legendary traditions."

Thanks to the magic of Google, I've been able to trace the original pic for your viewing pleasure. Here tis (Fig. 2): 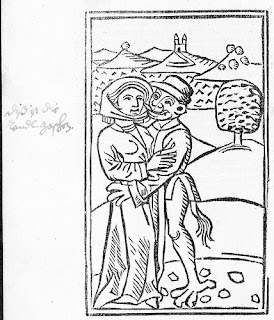 Fig. 2 "Male devil embracing woman".
The page's source lists Ulrich Molitor's De Lamiis et Pythonicis Mulieribus ("Of Witches and Diviner Women"). According to Erika Mailmain, this book was first published in 1493 (despite her source listing 1489). She adds that the ". . . book went into several editions, illustrated by woodcuts that were updated so it is possible to find different versions of the same image." That certainly explains why I've seen variations of the same woodcut. Here's a minor variation (Fig. 3): 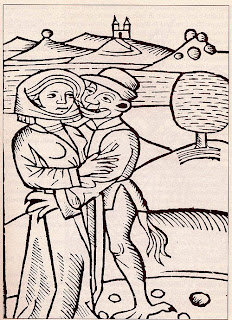 Fig. 3 "incisione da De lamiis et pythonicis mulieribus di Ulrich Molitor, Colonia, 1489".
And then there's others barely recognisable from the source, except for the same motifs. Like this one, from the c. 1498 Köln [Cologne] edition (Fig. 4): 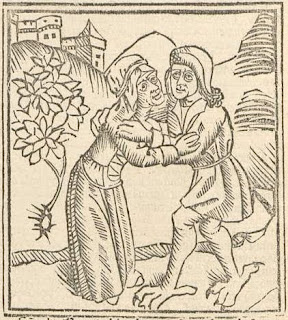 Fig. 4 Illustration 4.
I highly doubt the production designers consulted the original editions (due to their scarcity) for inspiration, so my guess is they came across the image in a book on witchcraft. Say, for instance Rossell Hope Robbins' The Encyclopedia of Witchcraft and Demonology (New York: Crown Publishers, Inc., 1959). On page 465, a reproduction of an image closely resembling Fig. 3 appears. The entry it's incorporated to? "Sexual Relations with Devils".
Posted by Anthony Hogg at 3:56 AM