Did Stoker Plan on Bringing Drac Back?

Speaking of sequels, have you heard rumours that Bram Stoker originally intended on writing a sequel to Dracula (1897)? Let's take a look. 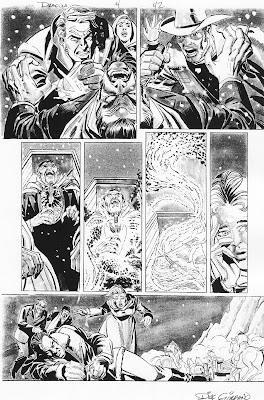 Sure, there's been heaps of movie sequels to adaptations of his work, like Dracula's Daughter (1936) and The Brides of Dracula (1960). A few authors have even cranked out their own: Freda Warrington's Dracula, the Undead (1997), Seán Manchester's Carmel: A Vampire Tale (2000) and Dacre Stoker and Ian Holt's Stoker estate-approved sequel spring to mind.

But what about Bram, himself? Did he ever write one? Did he plan to? Elizabeth Miller has the scoop, yet fails to mention a crucial scene in the novel (at least, in the entry itself).¹ As she points out, Dracula isn't destroyed in the proscribed manner recommended by Van Helsing during the course of the novel, i.e. stake through the heart, decapitation. Instead, he is "killed" when (spoiler alert!) Jonathan Harker shears his kukri knife through the Count's throat, while mortally-wounded Quincey Morris plunges his Bowie knife into the vampire's heart. Here's what happens next, as described by Mina:

It was like a miracle, but before our very eyes, and almost in the drawing of a breath, the whole body crumbled into dust and passed from our sight.

I shall be glad as long as I live that even in that moment of final dissolution, there was in the face a look of peace, such as I never could have imagined might have rested there.

The Castle of Dracula now stood out against the red sky, and every stone of its broken battlements was articulated against the light of the setting sun.

Wait, maybe the Count tricked them! He turned to dust at just the right moment! It's one of his powers, after all. Except for one thing: up to that point, Mina's forehead had been marked by the imprint of a Eucharistic Wafer, after being bitten by the Count. Here's how it went down:

"Then it is well. Now, Madam Mina, you are in any case quite safe here until the sunset. And before then we shall return . . . if . . . We shall return! But before we go let me see you armed against personal attack.I have myself,since you came down,prepared your chamber by the placing of things of which we know, so that He may not enter. Now let me guard yourself.On your forehead I touch this piece of Sacred Wafer in the name of the Father, the Son, and . . .

There was a fearful scream which almost froze our hearts to hear. As he had placed the Wafer on Mina's forehead, it had seared it . . . had burned into the flesh as though it had been a piece of whitehot metal. My poor darling's brain had told her the significance of the fact as quickly as her nerves received the pain of it,and the two so overwhelmed her that her overwrought nature had its voice in that dreadful scream.

The mark signifies her vampiric infection and "connection" to Dracula, as it's established that the the vampires in Stoker's universe cannot tolerate holy objects. Dracula is warded off with crucifixes. His "brides" are kept at bay with a "Holy Circle" (made from crumbled Eucharistic Wafers). It also imprisons the infected Mina, or, as Van Helsing says: "For I knew that we were safe within the ring, which she could not leave no more than they could enter." Yet, here's what happens after Dracula's disintegration:

I flew to him [Morris -ed.], for the Holy circle did not now keep me back, so did the two doctors. Jonathan knelt behind him and the wounded man laid back his head on his shoulder. With a sigh he took, with a feeble effort, my hand in that of his own which was unstained.

He must have seen the anguish of my heart in my face, for he smiled at me and said, "I am only too happy to have been of service! Oh, God!" he cried suddenly, struggling to a sitting posture and pointing to me. "It was worth for this to die! Look! Look!"

The sun was now right down upon the mountain top, and the red gleams fell upon my face, so that it was bathed in rosy light. With one impulse the men sank on their knees and a deep and earnest "Amen" broke from all as their eyes followed the pointing of his finger.

The dying man spoke, "Now God be thanked that all has not been in vain! See! The snow is not more stainless than her forehead! The curse has passed away!"

If Dracula didn't "die", then how on earth did that happen? The disappearance of the mark clearly indicates she's free from the vampiric taint. Also, what many seem to forget, is that Stoker's novel concludes with an epilogue set seven years afterwards. No further signs of vampirism and Dracula's castle is nothing more than an uninhabited wreck. In other words, he's dead.

But Dracula's a vampire. Undead. Gotta be a way around that, right? Maybe bring him back to life or something. Sure, that's possible. It's fiction, after all. But where's the signs that Stoker intended on doing so? That's the whole point. He makes it pretty clear that Dracula's karked it. Holmwood and Seward are happily married (not to each other). The Harkers have a son. Van Helsing seems jovial. That doesn't scream "set up" so much as "happy ending".

If Stoker did intend on writing a sequel, we have no proof of it (textual or otherwise), apart from hearsay and speculation. A shame, really, as it would've been great to see how the story continues. I guess that's left to our own imagination.

¹ To be fair, she dealt with this scene in the comments section.
Posted by Anthony Hogg at 5:39 AM

I have read a sequel, or a treatment - I forget now - that suggests that Dracula released his hold on Mina, hence the mark vanishing.

There is also the possibility that the mark was a hysterical reaction (Lucy suffered no such marks from the cross she was given) and that it vanished because she thought he was destroyed...

However, my honest opinion, there was no sequel in mind, Stoker had 15 years in which to wrote something, or even leave a note or initial treatment - he never did.

They're all interesting ideas, and sure, alternative explanations have been drummed up by a variety of writers (most notably Fred Saberhagen's The Dracula Tape), but the question is, did Stoker, himself, plan on writing a sequel.

Even if we dismiss Mina's reaction to holy items as an "hysterical reaction", it's entirely consistent with Stoker's Dracuverse that vampires (and their victims) fear such things. I'll counter Lucy's lack of reaction, with her reaction to the garlic. Oh, and the cross, after her death. Also remember the one that was stolen from her lips while she was lying in state.

The only explanation I can see for Dracula releasing his hold on Mina, is that he, well, died. Otherwise, the implication is, that Dracula can "retract" vampirism from his victims just...cos.

And you're right. Stoker had all that time to come up with a sequel. He didn't. Hell, he even touched on the vampire theme again in Lady of the Shroud and wrote other stories, but nothing on Drac.

So, if Stoker did intend on writing a sequel, he didn't leave enough signposts. Plus, no such thing drummed up after the book's publication.