I previously mentioned that I wasn't "big" on the vampire subculture. I've come across a forum post that articulates one of my reasons for this. 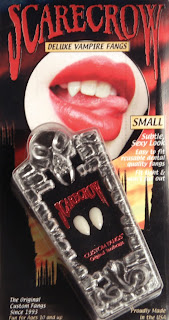 Sure, some people in "The Scene" can hide behind archaic spelling variations, or even paradoxically refer to themselves as "real vampires". They can even rally against Twilight for "tarnishing" their image. But, oh, how easily the rationale behind their own "existence" crumbles when it's given the most cursory examination.

So, now we turn to the forum post in question. Tamaranis' post appeared on The Federal Vampire and Zombie Agency boards discussing a certain vampire religious group. You'll see how his, let's call it, dragon logic, applies to "The Scene" on a broader scale:

Let's pretend for a moment the some of you out there are very interested in legends of dragons. Where do these stories come from, do they have an actual supernatural basis?

Now let's pretend that I've decided that a "real" dragon is actually just a person who siphons off excess psychic energy from the people around them, even though that has nothing whatsoever to do with any stories about dragons. (Kinda like it has nothing to do with vampires, werewolves, the lock ness monster, bigfoot, etc.) Let's also say I've "explained" that being a dragon has nothing to do with spewing deadly flames from my maw, flying, kidnapping damzels, or being a giant reptillian monster.

Let's further pretend I've got a few thousand like-minded dumbasses who agree with all my crazy dragon talk. There are enough of us, in fact, that we actually manage to change the definition of the word "dragon" (through our excessive new use for the word. Y'know, language changes)

And that's my beef, too. Essentially, we take a pre-conceived concept (the bloodsucking corpse of Slavic folklore), edit its unsavoury characteristics (the undead angle), mould it into something more applicable (being alive) to one's own fantasy-tinged superiority complex, then hijack the original term, revise its original use, discard its historical application, add a pinch of blood and voila! The modern vampire subculture.
Posted by Anthony Hogg at 4:52 AM