Just a few items concerning vampire-related things in my life at the moment. We start off with my pursuit of Montague Summers, an eBay purchase, a rambling (brief) film review and giving props to Amazon.
I've gotten onto a bit of a Montague Summers (1880-1948) kick. A very prolific writer, best known in vampire studies for writing The Vampire: His Kith and Kin (1928) and its companion tome, The Vampire in Europe (1929). Even though he only wrote these two books in the genre, their impact was massive. Indeed, you'll still find them in print today. He's even spawned a blatant imitator.
Anyhoo, I've been looking for biographical info on the guy, so I ordered two books about him through interlibrary loan. Borrowed both of 'em, yesterday. They are Timothy D'Arch Smith's The Books of the Beast: Essays on Aleister Crowley, Montague Summers, Francis Barrett and Others (Crucible, 1987) and Frederick S. Frank's Montague Summers: A Bibliographic Portrait (Metuchen: The Scarecrow Press, 1988).
I was, quite frankly, disappointed with both. Not with their content, though. You see, I was expecting primarily original material from both, but, alas, they're essentially anthologies of previously published material. D'Arch Smith's book has two essays on Summers: "Montague Summers" (51-57) and "R. A. Caton, Montague Summers, and The Fortune Press" (58-74).
The first essay (presumably published with the second), is reproduced from his 1984 booklet, Montague Summers: A Talk (Edinburgh: Trargara Press). The preface mispells this as "Trargars".
One section of the book did startle me, though: the confirmation that Summers participated in a Black Mass on 26 December, 1918 (56-57). As to one of the other rumours swirling about Summers, the pederasty coverage is relatively hazy, but plausible enough to feel quite disconcerting.
Frank's book is indeed a "bibliographic portrait", consisting of a stack of content mainly reproduced from Summers' own works. The essays that comprise the first part of the book (3-34) have all been published elsewhere. However, the bibliographic chronology and annotated bibliography (156-246) seem to be unique to the book. So, props for that.
I know these might sound like harsh assessements, but just to clarify, these books certainly possess high value for those digging up info on Summers. The harshness is merely one of personal taste. I am keen on original material, you see. First editions. Items as close to a primary source as possible. The books are valuable in that they collate some pretty rare stuff into a solid whole. So, yes, I still recommend them. Personally, though, it means I gotta track down the original sources. At least I've got leads to work with!
*****************************
Speaking of original prints, Christopher Frayling's Vampyres: Lord Byron to Count Dracula (London: Faber and Faber, 1991) arrived in the mail today. I purchased the item from eBay on the 26th of September for GBP 4.99 (after requesting a markdown from 7.99). Quite a bargain. 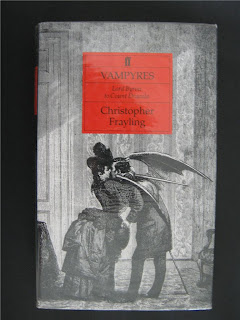 I already own the paperback edition, which was published the following year. But, I just had to add this '91 hardback to my collection. Incidentally, it's a revised edition of Frayling's The Vampyre: Lord Ruthven to Count Dracula (1978). That one's on my of to-gets, too.

*****************************
Watched Suck (2009) on DVD today. Although the title's probably ironic, it's not far from the truth. It features a swathe of cameos, namely Henry Rollins, Alice Cooper, Moby, Iggy Pop, Henry Rollins, hell, even Alex Lifeson from Rush. As you might've gathered, it's a vampire rock 'n' roll flick. But the music was pretty average and none of those aforementioned musos actually sing in the movie.

It's a bit of an odd flick, incorporating stop motion and dramatic lighting during various scenes. And, I gotta admit, Dimitri Coats made a pretty damn effective vampire...despite his dodgy clothes. I just felt that the flick ran out of steam once the band (The Winners) hit the US border. Just kind've ambled along at that point. It certainly has some clever moments, like the flashback scenes for Malcolm McDowell's vampire hunter. Rather than make him look young or hire a younger actor to play him, the director deftly integrated footage from an actual young McDowell. Nice touch.

I'm also savvy enough to know that the director reproduced a few classic album covers in his shots, namely The Beatles' Abbey Road, Bruce Springsteen's Born in the U.S.A., The Who's The Kids are Alright and T. Rex's Electric Warrior. While quietly amusing at first, it got a bit repetitive, real quick. Didn't really fit the narrative, either. And speaking of "quietly amusing", I don't think I even laughed once during the film. It's a horror comedy. Seemed too limp for that. That said, it was vaguely entertaining. Probably needed a faster pace.