Vampires & Werewolves vs. The Vampire Library

Forgot to include another item in the previous post. Looks like Mason Crest's got a little competition. Another publisher has their own series of vampire books for the Young Adult (YA) market. Time for a comparison.
In my coverage of Mason Crest's (MC) "The Making of a Monster: Vampires & Werewolves" series, I raised several issues with the books featured. Again, ones I haven't read yet, so I was only going on what their website had to offer. The same applies in my "examination" of ReferencePoint Press' (RPP) "The Vampire Library".
RPP bills itself as "an independent, nonfiction series publisher committed to bringing you relevant, convenient, and accessible research and learning tools for sixth to twelfth grade students." So, we're already dealing with a similar demographic. But the differences in promoting their series are marked.

Firstly, there are five books in the series, against MC's nine. All also published this year. They are David Robson's Encounters with Vampires, Gail B. Stewart's Vampires: Do They Exist?, Stuart A. Kallen's Vampire History and Lore, Kris Hirschmann's Vampires in Literature and Vampires in the Movies. Incidentally, I was only able to find those authors' names through Amazon, as RPP's page for the series omits this info.

The relative paucity of books in the series is offset by a higher page count: RPP's books have 80 each versus MC's 64. That gives us a total of 400 pages in the series, against MC's 576. RPP's topics appear to be much more generic. But then again, MC's series focuses on vampires and werewolves, so I'll give RPP leeway for that.

RPP has other plus points in its favour, going by their webpage. For starters, their titles actually come with little blurbs. 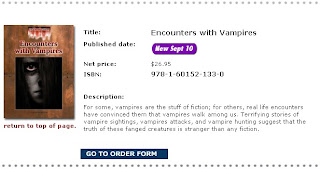 There's also a series description and series specifications, both more detailed than MC's version. The sidebar also gives a general view of the series' layout. There's even a "preview" of Kris Hirschmann's Vampires in the Movies (pdf), in which I noticed that scholar's beloved staple: footnotes! Hell yes! Whether they lead to anything substantial's hard to say at this point. All I know is, they're there.

So, going by the general content of the page, the previews, descriptions and whatnot, I'd say RPP's in the lead over MC. With due consideration of its intended audience, it looks like a pretty good "starter" for the YA crowd.
Posted by Anthony Hogg at 1:23 AM

Email ThisBlogThis!Share to TwitterShare to FacebookShare to Pinterest
Labels: Series