I've been in contact with Dr. Peter Mario Kreuter of the Südost-Institut, concerning his writings on vampires. He relayed some very interesting information to me, which I'll be sharing with you, today.

He's best known for his University of Bonn dissertation, Der Vampirglaube in Südosteuropa. Studien zur Genese, Bedeutung und Funktion. Rumänien und der Balkanraum (2001). If you'd like to know more about his writings, check out Niels' coverage. Suffice it to say, Kreuter's focus is on folkloric and 18th century representations of the vampire. My favourite field!

However, if you're hampered by an inability to speak or read German (like myself), then you might be wondering whether there'll be an English translation of this work. So, I e-mailed him to find out.¹ Unfortunately, I was somewhat disheartened by his reply: "No – there is no translation. And there will be none."² However, my dismay was countered by something I wasn't expecting: "I’m writing a new book about the popular vampire belief. It will be in English, and the publishing house shall be Palgrave Macmillan."³

So, you heard it first here, kids! He's got a new book on the way, and it's gonna be in English! Hell yes! But, as to its title or when it'll be ready, well, I can't say. Not because I've been "shushed", but that's all the info I could get. It's obviously too early to call if it's still in "writing" stage. Nonetheless, keep your eyes peeled for it. I'm sure it'll be great!

At some point, you also probably wondered, "Hang on...if Anthony says he can't read or write German, then how can he vouch for Kreuter's work?" That's a fair point. But, what I've neglected to mention, is that I have read a couple of his essays—both in English. 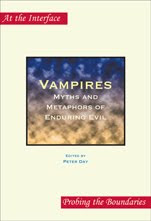 Namely, "The Name of the Vampire: Some Reflections on Current Linguistic Theories on the Etymology of the Word Vampire" in Vampires: Myths and Metaphors of Enduring Evil (Amsterdam: Rodopi, 2006), pp. 57-63 and "The Role of Women in Southeast European Vampire Belief" in Women in the Ottoman Balkans: Gender, Culture and History (London: I. B. Taurus, 2007), pp. 231-241.

Then, check out his daunting list of publications. What can I say? The guy clearly knows his stuff. His English writings provide an insight into what we're sorely deprived of in English-language books on the genre: authors consulting non-English sources. There are a few notable exceptions, of course (hats off to Barber, McClelland and Perkowski), but they're far and few between. I'm telling ya, there's a goldmine out there. I've rambled on about it before.

Hopefully, Kreuter's book isn't gonna be too overshadowed by the commercial "taint" that affect other works in the genre. You know, the same-old Vlad Dracula/Bathory/Bram Stoker blah-di-blah-blah stuff. His expertise and access to outside sources would be terribly wasted, otherwise. No pressure, Peter!