You've probably seen the following picture floating about the 'net and maybe in a few books. You might've wondered who illustrated it and why. I'm here to tell you. 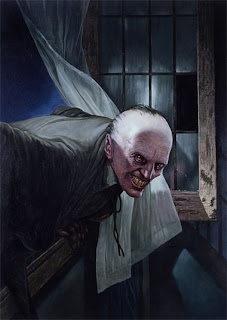 I was googlin' info on the Croglin Vampire today, when I came across Darren Turpin's blog entry (click on the picture). I'd seen the image several times before, not giving much thought to its source. It actually appears on the front cover of Manuela Dunn-Mascetti's Chronicles of the Vampire (London: Bloomsbury, 1991).

Thanks to Turpin's lead, I can tell you that it was illustrated by Les Edwards in 1984. It's titled (and depicts) "The Croglin Vampire". You've probably heard of that case before, as it's a frequently-reproduced "true" vampire tale. If you're unfamiliar with it, this article gives a pretty good summation. As to the why of this superb illustration, here's the scoop from Edwards' website:

Originally commissioned by Wiedenfeld & Nicholson but not used. Later used as a bookcover for Best New Horror 1990, edited by Stephen Jones and Ramsey Campbell and published by Robinson, and on Super-Monsters by Daniel Cohen, published by Archway. Also used on the CD cover Alive & Screaming by Krokus and a German Magazine.

I have a print of the Croglin Vampire (available from Les's website) hanging on a wall behind the door in my office. I tried to scare my 4 yr old niece with it, by telling her there was a monster living behind the door... but she was singularly unimpressed.