Happy Halloween, everyone! What perfect timing for a neglected round-up edition! What've I bought? What've I joined? What's coming up on the blog? Read on.

Ok, first up: a few eBay purchases came in the mail recently. Rosemary Ellen Guiley's Mysteries, Legends, and Unexplained Phenomena: Vampires (New York: Chelsea House Publishers, 2008) arrived on the 8th. I scored it for US $5.45 (not including shipping, of course). 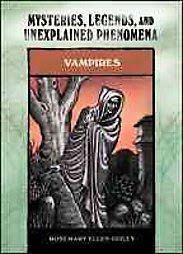 It's tailored for a Young Adult readership, but still fairly informative. And better still, it's got sweet, sweet endnotes (115) and a bibliography (116-117). What's the big deal about that? Read this and you'll see. It's not often you see 'em in books for that audience, so bonus points for that. In my view, kids should be encouraged to develop this academic habit so they'll appreciate the importance of paper trails for themselves and for others.

Also, as you might know, I'm big into first editions. So, if you relish 'em as much as I do, avoid the the Checkmark Books 2009 copy. That is a paperback reprint. Or paperback edition, if you will. Stick with the Chelsea House Publishers version.


On the 13th, Charlotte Montague's From Dracula to Twilight: Vampires: The Complete Guide to Vampire Mythology (New York: Chartwell Books, Inc., 2010) arrived. Apart from its cumbersome title, it served as a marked contrast to Guiley's book on several counts. Firstly, it wasn't a first edition, as I found out the hard way. However, it wasn't falsely listed as a first edition, at least, so I really should have double-checked before I placed my bid. That said, I won it for the princely sum of US $1.77, so let's say my vision was somewhat obscured in this regard.

For the record, the original was published by Omnipress, a London-based publishing company. Or, so you'd think going on the book's copyright info. So, I'm wondering what's the go with this Sphere version. Might look into that.

Apart from a few rare photographs, there's nothing overly remarkable about the book. Its simplistic text and voluminous illustrations indicate it's for the young'uns, too. However, it not only lacks endnotes but has no bibliography, either. That's especially troubling when we're fed practically unverifiable info. See Andrew's review for Montague's coverage of the vampire's reaction to sunlight. I expected a lot more from an author with an MA degree in history. 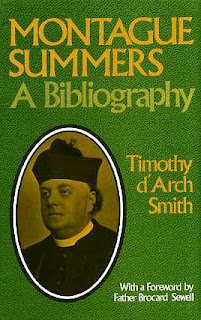 Incidentally, I like collecting further editions, too (as opposed to reprints), but I saw little in the way of revision from my recollections of the 1964 edition. Hell, Sewell's foreward and Smith's introduction from the first edition have been retained. Of course, at that time, Summers' autobiography, The Gallanty Show (1980), had yet to see published, so I can see why the book was revised (ever so slightly). But, come on! Give us a little more material, please. Something a bit more substantial than a coupla pages here and there.

That's not to say the book isn't handy, of course. Summers was a wildly prolific writer and Smith thoroughly and meticulously documents his writings wherever they've appeared. It must've been a nightmarish task. That said, in light of Summers contributions to modern vampire studies, it's a shame to find out that his writings on the subject were seemingly confined to two books and a letter to Time and Tide (January 18, 1929), pp. 60-61, correcting a reviewer's comments on his book, The Vampire: His Kith and Kin (1928). That's not Smith's fault, of course, but still...

It's title's been shortened to The Encyclopedia of Vampires & Werewolves, which is probably for the best, as the "other monsters" bit was largely drowned out by the vampire and werewolf entries in the first edition. It's also got a beaut new cover.

*****************************
On Tuesday (26th), I received an important letter from Elizabeth Miller, along with the Spring and Summer issues of The Borgo Post. What was so important about this letter, praytell? It confirmed my registration with the Transylvanian Society of Dracula. Yep, I'm now a member of the TSD!

It's the first time I've ever been part of a vampire "fan club", if you will. Concurrent to signing with them, I was thinking of joining The Vampire Empire, only to find out that it "now serves as a Research facility only." D'oh!

*****************************
I get a kick out of seeing what brings you guys to my blog. And what tops the list? Of all things, looks like you can't get enough of my posts on "antique" vampire killing kits (see here, here and here). They've scored mentions on the Daily Kos and The BS Historian. The latter was even inspired to continue their coverage of the kits, emphasising the silver bullet angle. Be sure to check it out.

Incidentally, I do see a few research ones, like "what kind of degree does a vampirologist need" from Albuquerque, New Mexico. So, if any of you have any queries, I'm happy to help. My e-mail's on my profile.

It invites punters to "Take a trip into the depths of Louisiana’s historic vampire culture", which, in this case, also serves as a testament True Blood's popularity, even on this far-flung corner of the globe.

This is sure to be the hottest spot in town for both mortals and vamps this Halloween. If you’re the the baddest vamp around, come down and order an ice cold bottle of Tru Blood to quench your thirst; but watch out for werewolves or there could be trouble!

Sip on some tantalising Tru Blood cocktails served by “Fangtasia” waitresses, and dance until the sun comes up to the sounds of our DJ and band. The Tru Blood cocktail list includes such classics as the Tequila Moonrise, The Blood Maker-ita, The Fangbanger, and Death on the Beach.

Even though V.I.P tix went for $36.00 and General Admission $26.00, they're now sold out. And on that chilling note, I wish everyone of you a safe and happy Halloween.
Posted by Anthony Hogg at 5:54 AM