When vampire books are translated into other languages, their covers and titles can vary quite drastically.
Here's an example I came across on eBay:

It is a retitled Spanish edition, called Los vampiros aun existen ("Vampires Still Do Exist"), of a popular American work on the subject. See if you can guess which one. 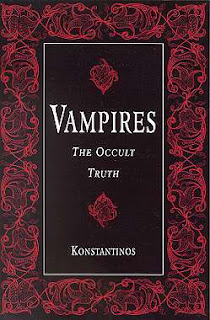 This process sometimes occurs even in English language works for British and American markets. For instance, Gabriel Ronay's The Dracula Myth (1972) is more commonly known by its American retitling, The Truth about Dracula (1972) and Christopher Frayling's The Vampyre: Lord Ruthven to Count Dracula (1978) was published in the US as Vampyre: A Bedside Companion (1978).
Posted by Anthony Hogg at 5:40 PM