Welcome to a new segment for my blog; "Q & A".
I'll be interviewing people associated with vampire scholarship in order to give an insight into what draws them to the field and what they hope to achieve by their contributions.

Our very first guest is Niels K. Petersen, a Danish vampirologist and the man behind Magia Posthuma.

I should point out that the questions were originally numbered. I've introduced paragraph breaks not found in his original reply and split the interview into two parts, due to length. 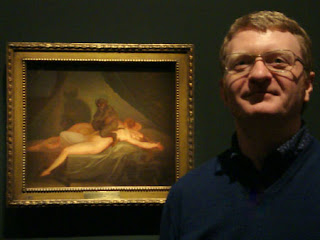 Anthony Hogg: What first inspired your interest in vampires?

Niels K. Petersen: It was reading Bram Stoker’s Dracula as a teenager that got me started. I had seen the documentary In Search of Dracula on Swedish TV, and I had read various vampire comic books like the Danish translation of Tomb of Dracula, so I knew about both the fictional and the so-called ‘historical’ Dracula, Vlad Tepes. Having read the novel, I began investigating and collecting everything about Dracula and vampires. I tried to compile facts about vampires and even had a box of index-cards with descriptions of vampires mentioned in various books. I must have been 13 or 14 years old when I started doing that.

Later on I got pretty disillusioned with the books I could lay my hand on. You should remember that this was way before the web, so books were often extremely hard to come by, and many books were out of print and almost impossible to buy. But the more books I found, the more I realized that most authors more or less just copied what others had written, perhaps adding some extra facts and the omnipresent Freudian analysis.

The chain of copyists led me back to Montague Summers, Stefan Hock and Dom Calmet, who were hard to come by then. I had to go the Royal Library in Copenhagen to find them, but that also meant that I could investigate a number of the original books on the subject from the 17th and 18th centuries. I also found a copy of Georg Tallar’s medical examination of victims of purported vampires or moroi, which wasn’t mentioned in any book I had seen before.

AH: You started your blog in 2007, but your readers probably aren't aware that you've been writing about vampires for a lot longer. Could you give us a background?

NKP: Well, I edited a fanzine on vampires and horror fiction when I was pretty young, so I wrote some articles on vampires that were based on books like Anthony Masters’ The Natural History of the Vampire. Later on, I was asked to write a couple of articles on similar matters, including a history of vampire cinema for a Danish magazine on horror movies to coincide with Coppola’s movie Bram Stoker’s Dracula.

But for many years I wasn’t actively doing anything related to the subject apart from perhaps watching the occasional vampire movie. I had become a father and was busy with other things. And I was still pretty disillusioned with most of the books that were published at the time. I suppose I had more or less dropped the subject.

But in 2006 I decided to compile the material I had for a book in my native language, Danish. However, when I began working on it, I started looking for extra information and for some of the books I didn’t have. I also discovered papers and a few books published in recent years, mostly in German, and thanks to the internet I was able to finally get hold of some of the books that had been almost impossible to find earlier on.

Initially I had no intention to go online with my interest. OK, I intended to make a companion web site to the book I was working on, but that would probably have been in Danish only.

AH: Your blog's primary focus are 18th century vampire reports and respective folklore associated with vampires. Why does this area interest you more than fictional literary contributions to the field, like, say Dracula?

NKP: So much has been written on Dracula, and I think that Elizabeth Miller in particular has done a great job in excavating Stoker and his count from the number of misconceptions and myths that he has been shrouded in for decades.

In general, a lot has been written on fictional vampires, but the historical origin of the vampire is quite another matter. Just take a look at a recent book like David J. Skal’s Romancing the Vampire, it thoroughly documents the fictional vampire, but when it comes to history and folklore it is very thin, and that is unfortunately symptomatic of the English-language literature on the subject.

But overall, one can say that most people who have seriously been investigating vampires have done so from an initial interest in the fictional vampire. When Aribert Schroeder travelled to a number of archives and libraries to look for source material on vampires, he wanted to trace the historical background of vampire fiction.

In later years, however, people, and mostly European researchers, have begun to investigate that history from other points of view. A growing interest over the past decades in the history of funerary practices and concepts of the dead with Philippe Ariès as one exponent, and the modern historical research into sorcery and witchcraft cases have, I suppose, led the way for an increasing interest in vampires and revenants from a similarly historical point of view. An example is the German book Gespenster und Politik, Ghosts and Politics, published in 2007 which compiles papers on e.g. Dom Calmet’s interest in vampires as related to his defense of the Church’s position in contemporary society against both those who questioned the Devil from the point of view of rational scepticism and those who superstitiously would believe all sorts of tales of revenants.

So, I simply aim at finding out “what really happened” by going ad fontes and trying to understand the events and concepts in terms of their context. By doing so, I hope to understand how the interest in and conception of vampires and other revenants have developed and how they are related to other aspects of society, religion, science etc. However, it is not only important to understand how vampire beliefs were interpreted and received by those more “enlightened” and educated people, who have communicated their experiences and thoughts on the matter in books and letters, but one should also try to grasp what kind of “belief system” that have made people genuinely fear the return and haunting of revenants.

In short, you may say that I am interested in the vampire as part of history, as a concept of "historical reality", rather than as a concept of some author’s or filmmaker’s imagination. Still, I am fascinated by the way vampires caught the 18th century imagination and transformed into something quite as different as the vampires of Dracula, Interview with the Vampire and Twilight. Within very few days of the incidents in the Serbian village Medvedja, people were writing about vampires in a way that carried the seed of modern vampire fiction.

Email ThisBlogThis!Share to TwitterShare to FacebookShare to Pinterest
Labels: Niels K. Petersen, Q and A

Thanks to both of you for an interesting interview. Having grown up in Denmark, and being of the same age as Niels K. Petersen, I'd like to bear witness that even his earliest vampire-related research, publications and society activities back in the 1970s had a lasting, positive influence on an entire generation of Danish horror fans, inspiring us all to dig deeper into the genre's mythological and historical roots and making him a highly respected figure in all quarters.

Thanks for your feedback, Nicolas.

It's interesting to see how many vampire scholars are influenced by books (particularly Stoker's Dracula) or films to probe deeper into the genre.

My major interest in the field was triggered by a film, too. You can read my background in vampire studies here.

Oh, and I should also mention that Niels told me that the painting in the background of your pic is Nicolai Abildgaard's Nightmare. Just to give other readers a heads-up.

Good pic, by the way!