I've been so apathetic about the Fright night 'reboot' (groooannn) that I hadn't noticed its trailer's been out for a while. Anyway, here it is:
Conspicuously absent from the trailer? Peter Vincent. Considering what they've done with the character, that's probably a good thing.

Now kids, I love the original. My interest in vampires was kicked off by its sequel, so, naturally, the originals hold a special place in my heart. I can buy that many of you younguns haven't seen either of 'em, or know they exist. YouTube comments like one from matthewsaidso, attest to that: 'This is like a﻿ vampire version of Disturbia. Thumbs up if you agree.'

Really? That's your point of comparison? I guess he didn't realise Disturbia (2007) is an obvious 'riff' (or rip, if you prefer) on Alfred Hitchcock's Rear window (1954) or the short story it's based on. Sure, a copyright claim was thrown out of court, but seriously, watch 'em back-to-back. You'll see.

But I digress. The original Fright night (1985), i.e. the proper one, was also obviously based on the same 'formula'. It was set in some sleepy Idaho town. This one's set in Vegas. Yes, that Vegas. Sigh. So much for subtlety. Goodbye small town terror.

Did I mention that 'Evil Ed' is played this-time-'round by Christopher Mintz-Plasse? You, know, McLovin from Superbad? Red Mist from Kick-ass? That guy? Yes. Yes I did. Oh man. Did you know it's also gonna be released in 3D? Why? Oh, right: inflated ticket prices. Ca-ching!

Anyway, another 'disturbing' thing I've noticed about the flick is this still: 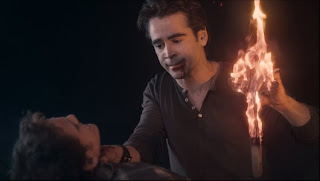 Yep, that's Colin Farrell (Jerry Dandridge) ripping away Charley's cross, with it bursting into flame in his hand. I have a bias with this kinda stuff. I like my vampire lore and I like it when vampires fear the cross. If this is supposed to be an edgy rejection of the 'rules', well, it's a cliche in itself.

The original featured a neat twist on the idea: 'You have to have faith for that to work on me, Mr. Vincent.' I'm not sure if they're gonna use the same rule in this one. If not, deliberately inverting that 'rule' is nothing new. Anne Rice's Interview with the vampire (1976) popularised the modern vampire's disdain for religious items. Stephen King's 'Salem's Lot (1975) had already established the requirement of the cross-bearer's 'faith', ten years before Fright night was released.

It seems that most vamps these days have no problem with crosses, as mentioned in Bunson (1993) and Melton's (1994) respective vampire encyclopedias. Sometimes, filmmakers have resorted to monologues or dialogue that subvert most of the rules altogether. Here's a classic exchange between Jack Crow and Father Adam Guiteau in John Carpenter's Vampires (1998). A word of warning, though: some of this dialogue ain't PC or kid-friendly:

Jack Crow: You ever seen a vampire?
Father Adam Guiteau: No I haven't.
Jack Crow: No... Well first of all, they're not romatic. Its not like they're a bunch of fuckin' fags hoppin' around in rented formal wear and seducing everybody in sight with cheesy Euro-trash accents, all right? Forget whatever you've seen in the movies: they don't turn into bats, crosses don't work. Garlic? You wanna try garlic? You could stand there with garlic around your neck and one of these buggers will bend you fucking over and take a walk up your strada-chocolata WHILE he's suckin' the blood outta your neck, all right? And they don't sleep in coffins lined in taffata. You wanna kill one, you drive a wooden stake right through his fuckin' heart. Sunlight turns 'em into crispy critters.

Funny thing is, the novel the film was based on (John Steakley's Vampire$, 1990) isn't this extreme in removing the classic elements. The crosses do work, to an extent. Nor does its plot feature the vampires' pursuit of a cross (the Cross of Berseires), as it does in the flick.

Point is, the trope is nothing new. Neither is inverting it. It seems crosses are introduced into plots specifically so they can then be demonstrated as ineffectual by the vamps wearing, laughing at or crushing the things. Hell, even John Badham's Dracula (1979) features the Count yanking the cross out of someone's hand and setting it alight in his, so even that's a cliche. Therefore, the 'edginess' has been sucked right out of it.

Enough rambling for now. If you still wanna catch the flick, it'll be released on - hey, whaddya know. It's premiering here, in Oz, August 18. Also, Hungary.

It'll be released in the US, Canda and Poland the following day. For release dates in other countries, follow the link.
Posted by Anthony Hogg at 5:46 AM