Jeez, time flies. It's already been two years since I started this thing. Time for a little retrospective. 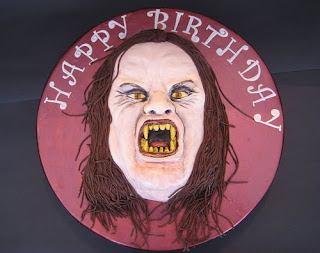 In hindsight, it's kind of odd that I didn't start this blog sooner. After all, I've been into vampires for about seventeen years now. Wow, even saying that aloud trips me out. Anyway, if you wanna know how I got into this "biz", then read my contribution to Vamp Chix. Interested in being a vampirologist, yourself? No problem. I've got some handy tips for you.

That's one of the beauties of having an online platform: you're able to interact with like-minded people. Take Niels' Magia Posthuma. I can not underplay how influential it's been in founding my own blog. I wasn't kidding when I said I was "deeply flattered" to get a shout-out from him in the paper he submitted to the Vienna conference on vampirism. As far as I'm concerned, his blog should have way more followers than it does. But, then again, that's the price of our niche vampire interest.

Even though I often cover pop culture angles on vampires, my primary interest is the folkloric angle. The scholarly approaches, specifically. That's why I get genuinely excited about stuff like this. Meanwhile, you might notice a hint of cynicism creeping in when I cover certain other things.

As far as I'm concerned, there's not nearly enough coverage given to the folkloric vampire. There's a whole goldmine of info out there, most of it, unfortunately, untranslated, as I've found in my readings. Instead, we're treated to the same-old formulaic rehashes. Roxana Stuart sums up the output perfectly in Stage Blood: Vampires of the 19th Century Stage (Bowling Green: Bowling Green State University Popular Press, 1994):

There are at least four levels of criticism in modern vampire studies: 1) ethnographic and anthropological explorations of the subject which take a scientific approach; 2) scholarly literary studies; 3) books on vampire lore and literature intended for popular consumption; and 4) "pop-trash" guidebooks for consumers and connoisseurs of horror fiction, comics, television, and movies (7).

Not much has changed in sixteen years. That said, what intrigues me about the current interest in vampires (yes, I'm talking about Twilight) is just how mainstream they've become. Vampire interest tends to come in waves, usually off the back of popular novels or movies. Or, in Dracula's case: plays. Even though the book's been in print since 1897, Stoker's novel didn't exactly set the world alight until it was adapted for theatre in the 1920s. Poor old Bram didn't even live to see its subsequent success, as he died in 1912. Even coverage of his passing was minimal: the media was kinda distracted by the Titanic going down, ya see.

Meanwhile, Meyer is livin' it up with the success of her novels and box-office takings from their movie adaptations. This is no ordinary level of success: the latest installment's even managed to break a few records. Pretty damn impressive. Also, Dracula's been around for 113 years; Twilight was published in 2005. How's that for context?

Mind you, it's not that I hate Twilight, per se. How am I supposed to make a proper critical analysis of something I haven't read? That said, it's got its fair share of detractors. At the very least, her Saga's helped spur publishers into giving more coverage of the vampire genre, so I'll give Meyers kudos for that. Whether the boom in non-fiction vampire books will amount to more substantial output, however, remains to be seen. Fingers crossed.

Anyway, back to the retrospective stuff. Thanks to this blog, I've had the privilege of reviewing a doco I probably wouldn't've known about otherwise. I've interviewed authors who've been inspiration in my own studies - a great honour, indeed. And thanks to a reader, I was even able to uncover the source of a mis-attributed "vampire" picture.

But most importantly, how else would I have had the privilege of acquiring your readership and following (28 at present count) for this blog? A big, warm thanks to all of you. Here's to many more anniversaries!

Email ThisBlogThis!Share to TwitterShare to FacebookShare to Pinterest
Labels: Milestones