As mentioned, it's not so easy defining what a vampire is and that's equally applicable to wording a poll on whether or not people believe in them. So, time for a little revision.
Firstly, apologies to the folks who voted on the poll already. All two of ya. Literally. For the record, there was one vote for "I believe there are people who call themselves vampires, yes, but there aren't any supernatural ones." The other chose "Not the bloodsucking kind, but the ones that can drain psychic energy, sure."

I found that the old poll was a little restrictive in the answers one could choose. Namely, one. So, this time 'round, I've allowed multiple responses to be selected. As you can see, I've also re-worded some of the options so they give a broader, yet distinctive definition. 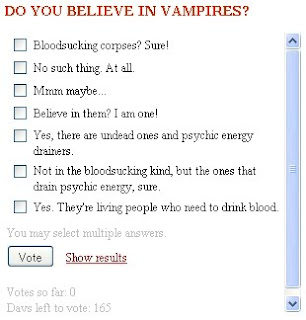 Once again, the poll's open till the end of the year. Lookin' forward to your responses!
Posted by Anthony Hogg at 12:35 AM

I'm kinda curious to know what you voted for! :P

What've I been up to? Been doing a lot of work on my other blog and today, I've been getting stuck into Don Ecker's Past Sins (2003).

Have there been any recent developments with your intended book?

The last two choices were the ones I picked.
I know Sanguine vampires personally as well as psi vampires.

Well, I have been looking for a job and that has taken all my time. I am soon going to be have to loose my place to live and have been trying to do anything to make money :(

So I have put it on the back burner for now.
I followed your other blog and will be reading on it soon.

Hmmm. Not the best news there. I certainly wish you all the best in your job searching, though.

I've also e-mailed you a few ideas for your manuscript. Hope they're helpful.

Oh, and be careful of following the other blog. Let's say some nutters like keeping their eye on it. If you're perceived as some kind of "supporter", they could target you for harassment! Just a head's up there.

Just to elaborate, check out my "Public Service Announcement" post.

Oh, and the "Stalking" thread. As long as you don't publicise your personal details, you should be right.

They probably wouldn't "uncover" anything you don't have online already. So, word to the wise, be miserly with your personal details. When it comes to the 'net, that's a general principle anyways.