The main cast of Fright Night remake (groan) was announced a little while ago. But, there was a glaring omission: who the hell's gonna be playing Amy?
Not like it's a minor role. She's Charley's girlfriend and the one they gotta save from the vampire. I mean, they went to the lengths of casing Charley's mum, fer cryin' out loud, but no Amy? Come on!

Anyway, thanks to Everlost of Vampire News, I now know. The role of Amy Peterson will be played by (drumrolls) Imogen Poots. 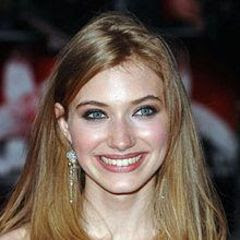 Heh heh. Poots. Yeah, I spose I can see the resemblance between her and the Amanda Bearse version. 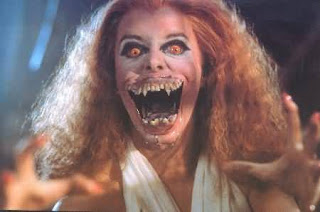 Come to think of it, where's Billy Cole? You know, Jerry's housemate in the original. The one played by Jonathan Stark. There've been some suggestions over who should play him. But if you believe what's written in the comments section here, looks like there won't be a Billy Cole character. Dispensing with him apparently makes Jerry more "efficient". I wonder if it's also to sheer off the gay subtext of the original? Maybe I'm not so far off the mark there. Here's what Marti Noxon, the remake's screenwriter, had to say on the subject:

It's interesting… I think they actually decided to stay away from it. Because times have changed so much. If we had gone there, I think it would have felt too precious and a little coy. There's already so much gay subtext in vampire stuff. [Laughs] We've covered that in Anne Rice, Brad Pitt and Tom Cruise. We've done that. So I think we just kind of moved away from that.