It's been a bit quiet since my previous rant, so time to fill the void with a few random updates on what's been happening since.
Finished reading Daniel J. Wood's Realm of the vampire: history and the undead (2011), which I'll be reviewing soon enough. The extent of the sources used for his book certainly made my rant worthwhile. Strangely, it appears to be available from only one source. Hopefully, it'll receive wider distribution, as it covers a largely neglected aspect of vampire folklore.
******************************
Speaking of vampire folklore, it's great to see Niels went ahead and purchased Daniela Soloviova-Horvilla's Les vampires : Du folklore slave à la littérature occidentale after I drew his attention to it. Better yet, he described it as looking 'very, very promising'. From him, that's high praise indeed. Hopefully, it pays off.

He also notes 'Soloviova-Horvilla herself has a background in Bulgaria which provides her with a working knowledge of the languages pertinent to the Slavic vampire' and 'her work obviously draws on a number of sources otherwise not easily available to Western scholars', which touches on the basis of my rant: we're seriously deprived in terms of non-English resources on the undead. This is especially pertinent considering that the vampire myth essentially has its basis in Slavic regions. Notably few English language authors tap into these resources, barring, of course, guys like Jan L. Perkowski and Bruce A. McClelland.

******************************
Came across an interview with Theresa Cheung, author of The Element encyclopedia of vampires (2009) which I've discussed before. She expresses a remarkably open-minded view on the existence of vampires which, if I might be snarky for a moment, could explain her susceptibility to the FVZA's claims.

******************************
I dunno if it's apparent in my blog, but I'm a fan of the vampire's 'modernity' in terms of its depiction in folklore and don't really buy into the 'universality' of the vampire mythos. So, it's great to see Niels giving this angle some coverage, also including Toby Lichtig well-researched review. Indeed, the discussion of Roger Luckhurst's notes to the Oxford World's Classics' edition of Dracula is seriously tempting me to buy a copy. 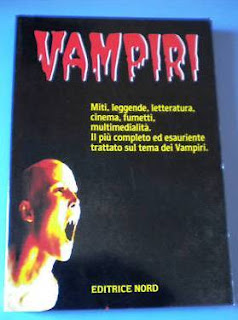 Yesterday, my eBay-purchased copy of Vampiri: miti, leggende, letteratura, cinema, fumetti, multimedialità (1998) arrived in the mail (bought on the 22nd). Can't say much about its contents, as my Italian is piss-weak, but I was surprised to discover it's actually a non-fiction vampire anthology. That makes it a bit of a rarity in its own right. Lots of pretty pictures, too.

I know the book "Vampiri",it was released in the 1998-1999 to celebrate a exposition in Milan dedicated to vampires.

Hmm, interesting. I got that impression from skimming some of the notes. Why did Milan have an exposition dedicated to vampires at that time, Fra?

I've found an old article of "Il corriere della sera" about the Milan vampire exposition and the reason seems to celebrate the centennial of "Dracula" and the brief vampire-mania who follows the Francis Ford Coppola's Dracula and Interwiew with the vampire.
Here the article (in italian):http://archiviostorico.corriere.it/1998/marzo/04/Tremate_tremate_vampiri_son_tornati_co_0_98030411628.shtml
P.S.In the same period in the castle of Belgioso (the little town in wich i live) was organized a little exposition on Dracula in collaboration with the Bucarest museum.

That said, it's somewhat curious those celebrations occurred roughly 4-5 years after the release of those flicks.