The day after I wrote the previous entry, the rest of my books arrived in the post. Time for more first impressions! 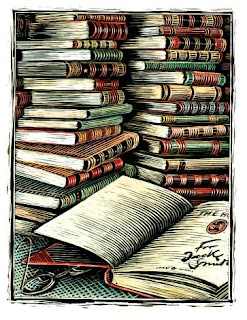 Despite what I've said about the vampire subculture, its place in vampire studies is now cemented by their coverage in mainstream media and books like...

If I could recommend any work on the vampire 'Scene', it'd be this one. I was quite impressed with his treatment of the subject, which he presents free from the sensationalism or 'look at these oddballs!' approach you usually find in such coverage. He treats it with impartiality and respect. Good on him. Certainly one of the great vampire books out there.

7. George A. Dunn and Rebecca Housel's (eds.) True blood and philosophy: we wanna think bad things with you (2010)

I haven't watched the show, nor have I read the books by Charlaine Harris (shock! horror!), so why'd I buy it? I knew it featured a contribution by Bruce A. McClelland, an author whose work in vampire studies I greatly respect. His contribution's called 'Un-true blood: the politics of artificiality' (pp. 79-90). You can read my interview with Bruce here, here, here and here.

However, his contribution wasn't the only reason I bought it. I get a kick out of the philosophical treatments on the subject, especially as it gives the Vampire Myth a scope beyond the show.

And the last book on the list? Drumroll, please.

8. Michelle Belanger's The psychic vampire codex: a manual of magick and energy work (2004)

It's a title that tends to crop up a lot in my book searches, so I thought I'd give it a crack. It also gives an interesting behind-the-scenes look into the vampire subculture.

And there you have it. There's a whole stack of other books on my 'wishlist', but those'll have to wait for now.

*****************************
Last Wednesday, I received an interesting package. Turned out to be a t-shirt, poster and temp fangmark tatts. They were prizes for a competition I'd entered on Templar Publishing's website, in their promotion of the vampire entry in the Ology World series. The question? Who wrote Dracula. Piss-easy.

I completely forgot that I'd even entered the competition (the accompanying letter's dated 15/01/11), so it was a pleasant surprise. Sure, the shirt don't fit and appears to be a girl's cut, but hey, a nice souvenir all the same.