I've noticed my tendency to go on little rants about the lack of 'access' we English as Only Language (EOL) folk have to foreign language material on vampires. Time for another one!
I loves my vampire folklore. Can't get enough of it. Unfortunately, it's often overlooked - or briefly covered - in favour of cinematic and literary treatments of the vampire genre. As I've mentioned before, the Library of Congress features 110 listings in its vampires in literature subject category, alone. Major works on vampire folklore in English are largely covered by Montague Summers, Paul Barber, Jan L. Perkowski, Bruce A. McClelland and Theresa Bane. Even then, their works provide a tantalising insight into what we EOLers are missing out on (not to detract from the brilliance of their writings).

Fer instance, flip your way through the 'Théses & Livres Culturels' tag in Lady Nini's blog, Livres de Vampires. Look at that stuff! I doubt it's all gold, but there's gotta be a lotta great, untapped info there. I even stumbled upon a recently published work dedicated to vampire folklore: Daniela Soloviova-Horville's Les vampires : du folklore slave à la littérature occidentale (2011).

And of all the stuff written in French on the subject, I can only think of books that've been translated into English: Ornella Volta's Le vampire : la mort, le sang, la peur (1962; The vampire, 1965), Jean Marigny's Sang pour sang : le réveil des vampires (1993; Vampires: the world of the undead, 1994) and Claude Lecouteux's Histoire des vampires : autopsie d'un mythe (1999; The secret history of vampires: their multiple forms and hidden purposes, 2010).

'Hang on a second!' some of you particularly well-read readers might interject. 'Wasn't Pëtr Bogatyrëv's Vampires in the Carpathians originally written in French?' Well, yeah. But keeping with the tradition of compulsively retitling the other French works, looks can be deceiving: that particular book had almost bugger-all to do with vampires.

With German works, we're even worse off: I can't think of any English translations. The tragedy of that situations becomes readily apparent when you realise that the early writings on the subject were primarily written in German (and Latin, to be fair). As was the first full-length literary study: Stefan Hock's Die Vampyrsagen und ihre Verwertung in der deutschen Litteratur (1900).

That's why I was exhilarated to hear about an upcoming English work by one of Germay's foremost vampire scholars, Peter Mario Kreuter. They're so ahead of us, that some of 'em are even starting to delve into obscure facets of the non-fiction vampire genre. Like, for example, vampirology's relation to librarianship. 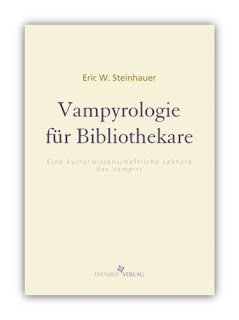 I was so excited to hear about it, that I went ahead and ordered a copy of the book on eBay, even though I won't be able to read the bloody thing. Niels' gave it a pretty positive review, at least. Phew.

So, publishers, if you're reading, instead of palming off the usual guff, how about focusing on translating instead? The genre would be enriched by an influx of 'new' information and the doorway would open to readers who probably aren't familiar with the foreign language stuff, encumbered, as we are, by our linguistic limitations.
Posted by Anthony Hogg at 5:04 AM