Vienna conference papers to be published

I briefly dealt with Niels' coverage of the 2009 Vienna conference, Vampirismus und magia posthuma im Diskurs der Habsburgermonarchie im 18. und 19. Jahrhundert, in the previous entry. Here's a bit more info.
Niels mentioned in a recent blog entry that he'd 'read a proof of [his] paper for the proceedings of the 2009 conference on vampirism and magia posthuma in Vienna, so the book should be on its way within a not too distant future'. He attended the conference and discussed the papers read there.

Here's a (pdf) list of abstracts for the papers presented at the conference. Karin Barton's 'The Habsburg flea: notes on the cultural and literary history of an insect vampire' provided me with the lead for chasing the elusive, early mentions of nosferatu, even if its reference was rather offhand, as attested by her abstract:

By the time the Der Floh (The Flea, 1869-1919) started publishing its political and anticlerical satires in Vienna, the miniature vampire of the insect world that gave its name to this publication had already established a significant role in satirical and pornographic writings. This paper provides a brief survey of flea-literature in the Holy Roman Empire, starting with the late medieval and pseudo-Ovidian Carmen de pulice which combines the motifs of sex and death with vampiric overtones, to the prominent Renaissance trope of the war between fleas and their allegedly preferred hosts, women. The mock epic of the Strassburg satirist and Rabelais-translator Johann Fischart, Flöh Hatz, Weiber Tratz (Flea Hunt, Womens’ Defiance 1573/77) marks the apex of the trope in German literature. Fischart’s work contains a remarkable comparison of three blood meals from the perspective of a flea narrator: the flea’s natural and legitimate theft of blood, the Christian Eucharist, and the quasi-cannibalistic ingestion of a flea filled with fresh human blood by a coarse butcher-maid turned flea-slayer, with the latter being unfavorably linked to the infamous 15th century Walachian ruler »Traculam«. Fischart’s Flea Hunt will be discussed as the locus classicus of the polysemic presentation of the flea – as insect, man, devil – one encounters from the early modern period to the 19th century in a variety of writings and genres in which the realistic and ubiquitous bloodsucker appears as a literary forerunner and comical side-kick of the vampire.

Will her paper make the cut in the upcoming published proceedings? We'll wait and see.

I'm certainly looking forward to the book's publication (even if I won't be able to read it), because it's not often conferences focus on the folkloric/historical angle of the vampire. At least, in English language proceedings. Instead, they tend to concentrate on the vampire's appearance in fictional literature and film. 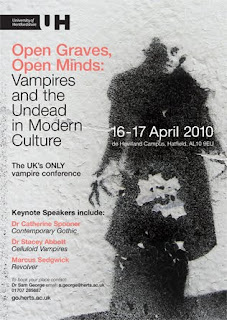 This is echoed in publications derived from such conferences, the primary examples being James Craig Holte's The fantastic vampire (2002) and Peter Day's Vampires: myths and metaphors of enduring evil (2006). I suspect this is because of the relative paucity of non-English sources consulted in vampire history research. I might come under fire for this, but most of the good stuff seems to be in German.

I mean, seriously, have a read through Niels' coverage of the subjects discussed there and see if you can find anything comparable in English with that level of depth (not including Barber, Perkowski, McClelland or Keysworth). Sigh. It's very frustrating. German publishers, if you can read this, start publishing translations in English, please!
Posted by Anthony Hogg at 11:43 PM