One for the Dracula Scholars

I've heard rumblings about plans for an 'event' to commemorate the centennial passing of Bram Stoker at 'Hull University', so I decided to do some sleuthing to find out what was going on. 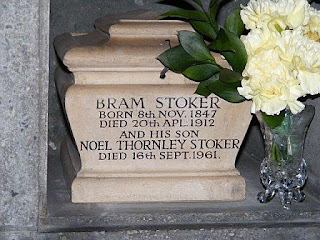 And by 'sleuthing', I of course mean 'Google searching'. Turns out the University of Hull is gonna be holding 'a three-day international conference'. The event's called Bram Stoker and Gothic Transformations. It'll be hosted at the Hull Campus of the University and in Whitby in April 2012. Has that whet your whistle? Then let's delve a little further. Here's its theme:

The conference is interested in the iconic significance of Stoker’s vampire novel and seeks to reappraise Stoker’s work within its fin-de-siècle cultural climate. It is also interested in exploring the broader context of the changing nature of Gothic productions from the late eighteenth century to the present. Using Dracula as a key point in the evolution of the genre, it seeks to explore the novel’s Gothic predecessors and influences, and the manner in which Stoker’s work renewed the Gothic for future generations.

They're accepting papers, if you wanna take part. Send an abstract of 250-300 words for a 20 minute paper to Dr Catherine Wynne (her e-mail addy's on the site). You've got till 1 May 2011 to submit. There are 20 topics on the site to choose from, but they appear to be flexible on this, so long as it caters to the conference's theme. Have fun!
Posted by Anthony Hogg at 3:58 PM