Came across a coupla interesting Dracula items on eBay while doing one of my sporadic searches.
The first depicts an unusually "decorated" edition of Bram Stoker's Dracula. 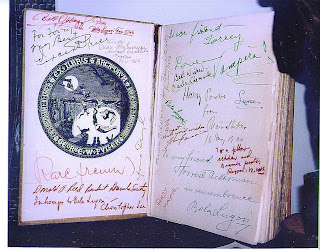 It seems pretty cheap for an asking price of US $18, until you properly read the seller's description:

One 8 x 10 color photo of Forry Ackerman's signed first edition of DRACULA. Clear and sharp. You can read all the signatures including Bram Stoker, Bela Lugosi, Vincent Price, Christopher Lee and Vampira.

The next item's one for the Vlad fans. Personally, I can't stand him, but even I can recognise the value in a genealogical study of the Transylvanian Terror. Even more so that it's actually George Florescu's Divanele domnesti din Tara Romanesca (1943). 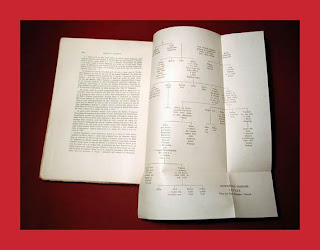 George also lead an investigation into Vlad's alleged burial site in Snagov monastery, in 1931. This was the same year the first authorised cinematic adaptation of Dracula was released. It was also the year Raymond T. McNally was born.

McNally would later go on to author the book that put Dracula studies on the map: In Search of Dracula: A True History of Dracula and Vampire Legends (Greenwich, CT: New York Graphic Society, 1972). 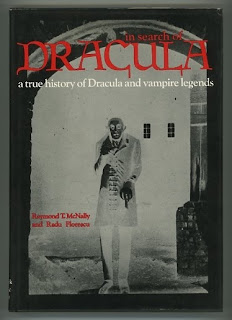 Here's a transcript from "Bloodlines: The Dracula Family Tree", which shows other links in the Florescu-Dracula chain.
Posted by Anthony Hogg at 11:34 PM