Yesterday, two Amazon purchases arrived. Namely, Mark Collins Jenkins' Vampire Forensics: Uncovering the Origins of an Enduring Legend (Washington, D.C.: National Geographic, 2010) and Claude Lecouteux's The Secret History of Vampires: Their Multiple Forms and Hidden Purposes (Rochester, Vermont/Toronto, Canada: Inner Traditions, 2010).
I've had 'em both on my Wish List for a while. Michele's review of Jenkins' book partly spurred me into finally buying it, and when I saw Lecouteux's book as its Amazonian "Frequently Bought Together" item, I thought "Oh, hell yeah!" and went ahead with the purchase.

Now, I wasn't expecting too much out of Jenkins' book, after all, it looks a little too glossy, for something of a scholarly nature. Well, at least, its cover does.

I thought it was gonna be a shiny, glossy thing, filled with lots of disturbing pics of dessicated corpses and whatnot, in light of its National Geographic pedigree. What it lacked in content, it'd make up for in visual "appeal".

Well, dear reader, I can tell you that it has bugger all pictures and I'm not overly thrilled about the content thus far, either. As of this writing, I'm up to page 76 and I haven't encountered much that I wouldn't find in other mainstream, run-of-the-mill works on the subject. It's the usual stroll through the same old, same old vampire stuff you've encountered a million times before (Vlad Ţepeş, Count Dracula, Arnold Paole, Polidori's "The Vampyre"), told in a narrative style.

At most, I'd say this book would be a passable, cursory introduction into the genre. It's also a pretty breezy read, so you'll work your way through it, quickly enough. But, from my reading thus far, there are waaay better books out there. Unless it turns a sharp corner into some meaty, scholarly stuff, can't say I'd really recommend this one.

I haven't started on Lecouteux's book, yet, but Niels' post on the possible inaccuracies of its translation, has given me cause for concern. I did point out, however, that he was working off a German translation of the original French book. As I mentioned, I actually own a copy of the original French version, but since I can't speak the language, I can hardly make comparisons of my own, heh heh. 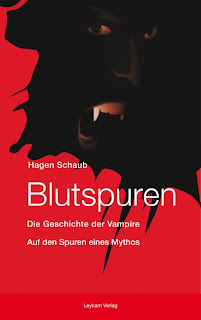 Again, I can't comment too much on its content, as I don't know the language, but it's surprising to see that a book covering the "magia posthuma" era, would only have fleeting mentions of Peter Plogojowitz (90) and Arnold Paole (91).

This one turned out to be a pleasant surprise. Its scope is admittedly narrow, as it focuses on the supernatural vampire variant in movies and only covers about 19 of 'em in total, but its application of genre "semantics" and "syntax" in correspondence with the evolution of the vampire's appearance, attributes and wards, in these mediums, is quite a fascinating concept.

Sure, a lot of what Kane covers has been said before, but never has it been boiled down, taken apart and articulated so well. Definitely recommended.
Posted by Anthony Hogg at 2:58 PM