I've heard rumblings about this one for a while now, so it gives me great pleasure to confirm that there's gonna be a third edition of J. Gordon Melton's The Vampire Book: The Encyclopedia of the Undead.
According to its Amazon listing, it's due for release on September 1, and it'll set you back a mere US $29.95 (not including postage).

The first edition was released in 1994, and even though its was preceded by Matthew Bunson's The Vampire Encyclopedia (1993), it's set the benchmark for subsequent vampire encyclopaedias. 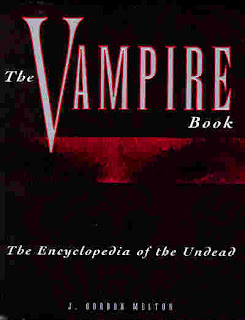 Its popularity also saw several other similar works enter the market, and Melton, himself, followed it up with a second edition in 1999. 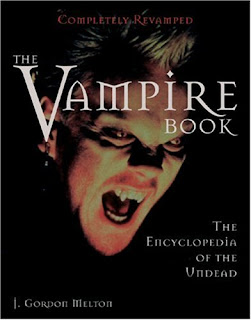 It capitalised on contemporary interest in Buffy and Blade and also greatly expanded entries on White Wolf's role-playing game, Vampire: The Masquerade. It even incorporated a listing of websites (811-813), probably one of the first vampire books to do so.

No doubt the third edition will cover the Twilight craze and shine a light on the vampire's integration into mainstream pop culture in the 11 years since the previous work was published.
Posted by Anthony Hogg at 1:45 PM

I have the first edition. It has some flaws, but it is interesting.

I agree with ya, rosewall1!

One flaw I remember (and it's repeated in the second edition), is that Lilith has her origins in 2000AD. Heh heh.

But it's a pretty damn good book for vampire enthusiasts and one I recommend to anyone with even a cursory interest in the genre.

I'm certainly interested in seeing how the third ed. pans out.