Been a while since I've done this segment. Time to share some forthcoming vampire books I've stumbled across via the the American, British, German and French versions of Amazon. 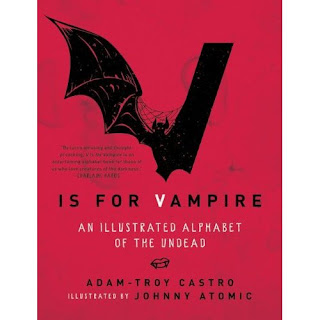 I've also translated the non-English titles with this baby. So, forgive me if they're a lil wonky. Without further ado and in chronological and alphabetical order by release date...

Title: Bringing light to Twilight: perspectives on a pop culture phenomenon
Author: Giselle Liza Anatol (ed.)
Release date: 24 May 2011
Worth the wait? The Twilight bandwagon keeps on a-rollin', as shown by this latest collection of essays devoted to Meyer's astoundingly successful saga. If you're not a fan, I'm sure something on vamps, in general, could be gleaned from its pages. I do like the idea of examining the works from the perspective of a pop culture phenomenon, though.

Title: V is for vampire: an illustrated alphabet of the undead
Author: Adam-Troy Castro; illustrated by Johnny Atomic
Release date: 7 June 2011
Worth the wait? When I first came across this book, I thought it'd be another entry in my beloved vampire reference book genre, like J. Gordon Melton's The vampire book: encyclopedia of the undead (1994; 1999; 2011). Its title even echoes David J. Skal's V is for vampire: the a-z guide to everything undead (1996). Alas, it appears to be little more than a portfolio, going by its product description. I know I'm cheating by including an under-100-pages book in this segment, but damn, it's got a pretty sweet cover.

Title: Der sympathische Vampir: Visualisierungen von Männlichkeiten in der TV-Serie Buffy (The sympathetic vampire: visualizations of masculinity in the TV series Buffy)
Author: Marcus Recht
Release date: 11 July 2011
Worth the wait? The title pretty much speaks for itself, doesn't it? Talk about specific, too! Recht's set himself up with quite a challenge by devoting 340 pages to that oblique topic, so kudos for effort!

Title: Vampires: the twilight world
Author: Simon Marsden
Release date: 6 October 2011
Worth the wait? I was pleasantly surprised to see Marsden's gonna be contributing a volume on vamps, even if his title's an obvious riff on Stephenie Meyer's well-known saga. He's my favourite photographer and I grew up on his other works like Phantom of the Isles: further tales from the Haunted Realm (1990) and The journal of a ghosthunter: in search of the undead from Ireland to Transylvania (1994). That said, don't expect too much scholarship from his work. You buy (or borrow) the books for the stories and awesome pics. Have a browse through his stuff. You'll see what I mean. Hopefully this book's packed with new stuff and not just a 'compilation' of sorts.

Title: Blut ist ein besonderer Saft: Eine Kulturgeschichte der Vampire (Blood is a special liquid: a cultural history of vampires)
Author: Leah Levine
Release date: 15 November 2011
Worth the wait? Yes, blood certainly is a 'special liquid'. I like the 'cultural history of vampires' angle, but I wonder how much justice it'd be given over the course of 180 pages. I'm not familiar with any of Ms. Levine's other works, so I've got no context to give ya. However, Niels does, not only noting that the book will actually be published in May (the November copy's the only one I saw on Amazon.de), but that 'Amazon describes the author as a well-known German witch and a founder of a school for witches in Hannover!' I'm guessing he's worried about an occultic angle potentially 'ruining' the scholarly potential of the subject matter.

Title: True blood: vampires and Southern Gothic
Author: Brigid Cherry
Release date: May 2012
Worth the wait? A contribution to the 'Investigating cult TV series' series, which I know nothing about, this looks like it might be one of those philosophy books dedicated to mainstream pop culture franchises. Two, off the top of my head, which focus on HBO's True blood are True blood and philosophy: we wanna think bad things with you and A taste of true blood: the fangbanger's guide (both 2010).

Title: Screening the undead: vampires and zombies in film and television
Author: Leon Hunt, Sharon Lockyer & Milly Williamson
Release date: December 2012
Worth the Wait? It's amazing how 'advanced' Amazon.co.uk's publishing schedule is, isn't it? As to the book itself, I don't immediately recognise Leon and Sharon from anywhere, but I am familiar with Milly's The lure of the vampire: gender, fiction and fandom from Bram Stoker to Buffy (2005). Whether it'll focus on these relatively narrow facets, I can't say. Going by the title - which is about all I can do right now - it sounds like a fairly generic (albeit academic) run-through of the undead genre. However, due to Milly's participation, it could have some merit.

And that concludes this segment. Now, I know I've limited my scope just by focusing on the stuff featured on Amazon, especially when works like Daniel J. Wood's Realm of the vampire (2011) aren't featured in its contents. So, if any of you other publishers out there want to 'broadcast' your books, feel free to e-mail me. But remember, they've gotta be non-fiction works on vampires.
Posted by Anthony Hogg at 12:49 AM

Email ThisBlogThis!Share to TwitterShare to FacebookShare to Pinterest
Labels: Upcoming Books on Vampires