I'll start this off by saying that I'm not exactly a huge fan of the TV series or the original movie. But I am sick and tired of the glut of so-called "reboots", so this news really takes the cake.
How soon should one wait before remaking a "dead" property? Twenty years? Ten? Well, the critically-acclaimed TV series wrapped up in 2003, but if you wanna talk canon, it's still going (in comic book form).

"Oh, cool," you might've thought. "They're gonna do a movie version of the TV series!" Bzzt. Wrong. Not only won't it feature Sarah Michelle Gellar or anyone else from the Scooby Gang, but the franchise's creator, Joss Whedon, has no involvement in the project. Here's what he had to say:

I always hoped that Buffy would live on even after my death. But, you know, AFTER. I don't love the idea of my creation in other hands, but I'm also well aware that many more hands than mine went into making that show what it was. And there is no legal grounds for doing anything other than sighing audibly. I can't wish people who are passionate about my little myth ill. I can, however, take this time to announce that I'm making a Batman movie. Because there's a franchise that truly needs updating. So look for The Dark Knight Rises Way Earlier Than That Other One And Also More Cheaply And In Toronto, rebooting into a theater near you.

No legal grounds indeed. You see, Whedon doesn't own the rights to his own Buffyverse. They're in the hands of Fran Rubel Kuzui (the original movie's director) and her husband, Kaz Kuzui. Which is wonderful when you learn of Whedon's plight during the first movie's creative direction: "The original script Whedon wrote was completely rewritten to make the film more 'light.' Whedon reportedly stormed off the set during production and never returned because of how what he had planned was being put together". To add insult to injury, one of Whedon's proposed Buffy spin-offs was also nixed. 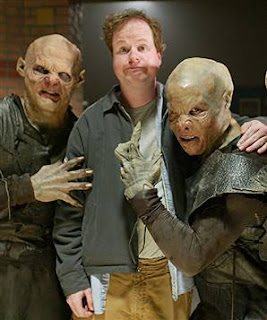 Ok, so who's writing the script for this one? Heard of Whit Anderson? I IMDBed the name, to check their "credentials". What experience does she have to tackle a franchise like Buffy? Anything of note?

For starters, she hasn't written a film before. At least, one that's been released. However, she did star as Liz Meyers in Through Walls (2004), Jill in Saw Rebirth (2005), "Yes Patron" in Yes Man (2008) and...that's it. Now, contrast her résumé with Whedon's. Notice the difference?

However, it'd be remiss of me not to mention another one of her glorious contributions to cinema. Did you know the remake was her idea?

Apparently a huge Buffy fan who pitched Roven the idea, and the deal was made: Warner Bros. Pictures optioned the rights from directors Fran and Kaz Kuzui, and from Sandollar Productions (Sandy Gallin and Dolly Parton), who did the original movie version (pre-TV's Buffy).