The origin of the word, nosferatu, has been a contentious topic with scholars. Emily Gerard (1849-1905) is generally considered to be the earliest author to use the term. However, a source pre-dating her work is dealt with in a certain vampire dictionary. Let's take a look at it. 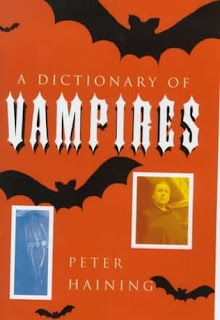 I know Wikipedia's reliability as an information source is roundly criticised, but their nosferatu page gave me an invaluable paper trail. Take this sentence: "Peter Haining identifies an earlier source for nosferatu as 'Roumanian Superstitions (1861)' by Heinrich von Wlislocki." The source is identified as Peter Haining's A Dictionary of Vampires (London: Robert Hale, 2000). As it happens, I own a copy of this book. Here's the relevant extract:

In his book, Roumanian Superstitions (1861), the distinguished historian, Heinrich von Wlislocki has provided probably the definitive statement on its activities: 'The Nosferatu not only sucks the blood of sleeping people, but also does mischief as an Incubus or Succubus. It is the stillborn, illegitimate child of two people who are similarly illegitimate. It is hardly put under the earth before it awakes to life and leaves its grave never to return. It visits people by night and when its sex is male, it visits women; when female, men.' (184-185)

I was unable to find any trace of this von Wlislocki book anywhere. At this point, serendipity stepped into the picture. You see, I was reading Margaret L. Carter's Shadow of a Shade: A Survey of Vampirism in Literature (New York: Gordon Press, 1975) on Friday. No particular reason. But boy did my eyes light up when I came across this:

Rumania is the home of the Nosferat, the name applied (not quite accurately) to Count Dracula by his creator. A Nosferat, reports Heinrich von Wlislocki (quoted in Ernest Jones' On the Nightmare) is the "stillborn, illegitimate child of two people who are similarly illegitimate." (2)

Was it possible that Haining quoted von Wlislocki via Jones? This assumption would be pretty hard to establish as fact, as Haining's Dictionary doesn't contain a bibliography. So, that left me with the option of consulting Jones' book, instead.

Thankfully, I have a copy of it. The original, in fact, not the reprint Carter cites. I'd downloaded it from Internet Archive on February 5, 2009. Here's what Jones' On the Nightmare (London: Hogarth Press, 1931) has to say:

If you can't read German (like me), that's ok, because Jones also supplies an English translation:

The similarity between Jones' translation and Haining's quote from von Wlislocki, is too obvious to dismiss. But, unlike Haining, Jones directly cites his source: "Quoted by Stern, op. cit. Bd. i. S. 357, 358" (117).

Thanks to the Wikipedia entry, I had already come across mentions of this article in David J. Skal's Hollywood Gothic: The Tangled Web of Dracula from Novel to Stage to Screen, rev. ed. (2004). I don't have a copy of this book. Thankfully, Google Books has "previews" of it. Which is why I can tell you that it includes "an excerpt from Wlislocki's article 'Torturing Spirits in Romanian Popular Belief' from the German periodical Am Ur-Quell ("At the Primary Source"), vol. 6, 1896, pp. 108-109" (80-81), which was translated and researched by Lokke Heiss and Andrea Kirchhartz. So, to come full circle, here's a section of their translation which ties in with the previous sources (except Haining's):

The most dangerous torturing spirit of Romanian folklore, which not only sucks sleeping people's blood but also plays a dangerous part as incubus and succubus is the Nosferat. According to popular belief, the Nosferat is the illegitimate child of two people who are illegitimate themselves. The Nosferat is born dead, but after burial awakens to life and never returns to his grave, but assumes different shapes. One moment he appears as a black dog, now as a beetle, now as a butterfly, yea, even now as a straw. In these shapes he visits people at night; if he is of the male sex, women; if female, she pays her visit to men. (80-81)

And this is where I've come up against a brick wall. As of this writing, I haven't been able to access a copy of von Wilslocki's "Quälgeister im Volksglauben der Rumänen". That's where I've hit a dead-end with the Internet Archive and Google Books. So, I can't tell you whether or not von Wlislocki's article, in turn, came from an earlier source. But, let's say I'm highly doubtful.

For starters, Heinrich von Wlislocki (1856-1907) would've been five years old when Haining clams Roumanian Superstitions (1861) was published. Thus, I'm left with three possibilities:
I'm hesistant to accept the last option, although, it doesn't help that Haining (1940-2007) obviously transposed von Wlislocki's "Nosferat" to "Nosferatu". Nor does it help that Haining's book contains no bibliography. A mere book title (which, incidentally, I haven't even been able to trace) isn't good enough. Yet, I'm also fairly convinced that this book doesn't exist, anyway.

If I do get my hands on a copy of von Wlislocki's article, I'll let you know if it cites publication in an earlier work. However, the periodical's title ("At the Primary Source") seems more like an omen than a glimmer of hope.
Posted by Anthony Hogg at 4:53 PM

Great work. However, I don't think your three possibilities are necessary.

The 1861 date must surely come from a conflation of footnotes on p117 of Jones' 'On The Nightmare'.

There IS an 1861 dated bibliographic reference on that page, but it's to a completely different preceding point.

Have another look at Footnotes 1 (irrelevant to 'Nosferat', dated 1861) and 2 (the Stern quote, undated in Jones' text).

As the two are oddly arranged relative to one another, and Footnote 2 lacks a date, it's easy to see how someone in a rush might attribute that date to the wrong footnote.